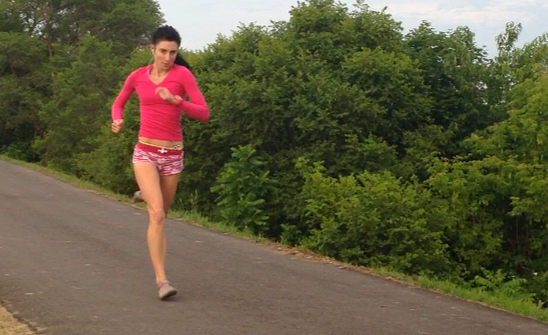 During barefoot running, modifications in knee and hip flexion are characterized as an automatic process that occurs quickly and efficiently, and out of the realm of conscious awareness. Again, this is how knee and hip flexion is a reflexive reaction that is a habitual behavior evolved by humans.

One of the best known studies to illustrate the power of knee and hip flexion during barefoot running came from Dr. Lieberman and Dr. Robbins.

This is why running shoes are not needed for impact reduction in forefoot running: humans possess their own ability to regulate impact moderating behavior via automatic impulses to adjust joint flexion accordingly to surface hardness.

If you prefer not to run barefoot, at least run in a barefoot-like running shoe.

It turns out that thick shoe cushioning is useless for impact reduction, even for forefoot running.

As a result, impact is higher in cushioned forefoot running shoes because they reduce knee and hip flexion and therefore, are considered a major source of injury.

When it comes to injury, the root of the problem is often the shoe which spurs changes to ones forefoot running technique, including delayed or reduced knee and hip flexion.

Experts are finally starting to realize that with all the technology fabricated into the modern running shoe, such footwear fails to deliver the same impact protection as the human body during barefoot running. Why? Because the bare foot requires only one simple stimulus to trigger adequate moderations in hip and knee flexion and that is the natural ground.

If you are skeptical about running barefoot, the next best thing is zero drop, barefoot shoes as these shoes increase knee flexion, too. And, a study by Clark et al. found that running shoes with harder midsoles increased knee flexion. Remember, greater joint flexion during running means the body is doing its job at lowering impact.