When running, keeping your hips squared, or aligning the hip bones straight in the direction you are running, may markedly improve leg kinematics, especially for forefoot strike runners.

Below, shows Tirunesh Dibaba and Meseret Defar, the best female distance runners in the world.  As you can see, their hips are ‘squared’ and their thighs do not point inward like the runners on the right.

If you watch Dibaba or Defar run, they have a smooth, rhythmic flow compared to many North American runners who often appear stiff, rigid, and tight in the hips.

When we walk, our hips are usually ‘squared’ and our thighs are spaced apart. But try walking with your thighs close to each other. Walking becomes difficult as this acts as a restraint and you lose that ‘smoothness’.  The same applies to running: the greater the space between your thighs (thigh gap), the smoother you may be able to run. 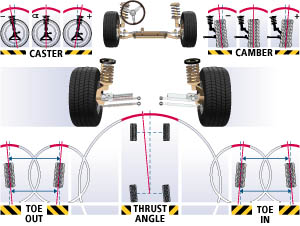 Many Ethiopian distance runners, female and male, have similar hip/femoral alignment to Dibaba and Defar.

Research in the past has pointed out that weak hip flexors and adductors cause the thighs to point inward when running and has been implicated in ITBS and runner’s knee.

So, what accounts for the good hip/femoral alignment in Ethiopian runners? Barefoot running.

Ethiopian runners, like Dibaba and Defar, ran barefoot for over a decade. Therefore, barefoot running must have some bearing on their straighter hip/femoral alignment.  Not only that, North American runners, like myself, wore shoes even before learning to walk and certain types of footwear have been shown to influence a heel strike running pattern and lower extremity weakness.

Unsurprisingly, there’s limited research on the relationship between barefoot running and hip/femoral alignment.  I have every reason to believe that a connection exists.

My Experience with Squaring my Hips

I was a heel striker bombarded with injuries and therefore switched to forefoot running. I have been injury-free ever since, until I suffered ITBS.

After reviewing a video analysis of my gait, I noticed my thighs pointed inward and I had a narrow step width, or a crossover gait!

I researched the cause(s) of ITBS in runners and found ITBS is primarily caused by a narrow step width gait in runners.

Watching Dibaba run also gave me a better idea as to how my thighs and hips should look when running.

To combat my ITBS, I ran with the painful condition and made the conscious effort to increase my thigh-gap or “spread my legs” while I ran, for lack of better terms.

Not only did my ITBS vanish, I ran smoother, my foot-strike position was closer to my body, the ground felt softer beneath my feet, and I was able to run longer. 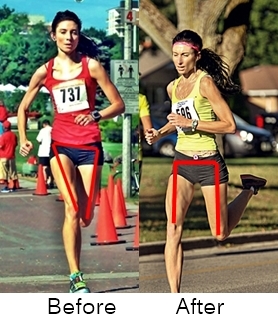 Initially, I felt as if I was running ‘bull-legged, but this was a false perception. Anytime you change your mechanics, the motions feel oddly different until you adapt.  The important thing was, squaring my hips and widening my step-width felt comfortable, my legs felt less restrained when I ran.

If you are a heel striker transitioning to forefoot running and something still doesn’t feel right with your stride, try ‘squaring’ your hips, or increasing your thigh-gap, making sure to keep both knees bent -this will help land on your forefoot close to the body. For me, that was the missing link to smoother, easier forefoot running.  Try it.