Tirunesh Dibaba, an Ethiopian distance runner, is the most accomplished runner in the world having won 3 Olympic gold medals, countless World Championship gold medals, not to mention she holds 3 world records. 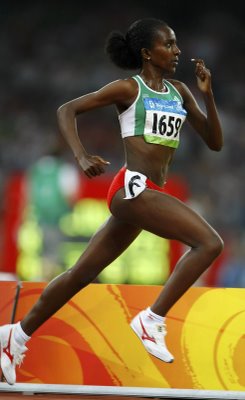 Aside from being incredibly fast, she is best known for her flawless, effortless running style.   And, lets be honest, her running form looks better than any female runner I’ve ever seen.

Unlike most joggers, Dibaba does not heel strike, she is a forefoot striker which means she lands on the balls of her foot before bringing the rest of the foot, heel included, down to the ground.

Humans Evolved to Run, But with a Forefoot Strike, Or a Heel Strike?

Maybe humans were meant to run forefoot, just not in a heeled running shoe?

You also have to look at the fact that heel strikers are not winning gold medals, or  smashing records like Tirunesh, and her sister Genzebe.

From a performance perspective, running barefoot in her earlier years is a major attribute to Tirunesh Dibaba’s flawless, efficient running style.

This is why Dibaba makes running a 10,000m race in 30 minutes look easy.  Her legs are relaxed as she uses less muscular effort for momentum. Her forefoot strike prevents her from braking with the ground, allowing her to glide across the track.

I know you look at Tirunesh Dibaba and think to yourself, gee, I wish I could run like that!  Dibaba’s forefoot running style is not hard to replicate.  Ultimately, the stride of many barefoot runners, or forefoot strikers resembles that of Dibaba’s, smooth and efficient.

Yes, we can’t ignore that Dibaba trains harder than all of her competitors, and of course there are many other variables contributing to her superior athletic status.  But, we can’t ignore that her forefoot running style may be directly related to energy cost, which obviously contributes to Dibaba’s success as a runner.

As I continue to review the scientific literature on heel strike and forefoot strike mechanics, I do so with a healthy does of skepticism.  But, watching Tirunesh and her sister’s run, along with other Ethiopian athletic super-stars such as Kenenisa Bekele, and Berhane Adere, the more I realize that to get faster as a distance runner, maybe we should do so without the heel strike.

In my opinion, Tirunesh Dibaba’s running form is a perfect example of how humans may have been designed to run, on their forefoot, not on their heels.