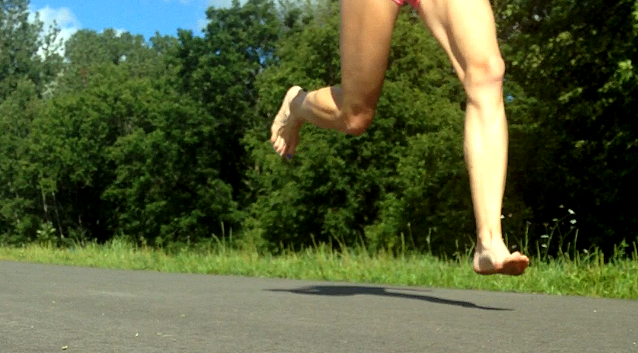 How to Improve Your Forefoot Running Technique

There are neural mechanisms in the bottoms of our feet that underlie joint function and smooth movement coordination. The foot’s sensory receptors are also responsible motor learning and performance in forefoot running.

The neural mechanisms are known as proprioception, and I know I sound like a broken record because I am always discussing proprioception, but more and more research keeps churning out conclusive evidence showing that optimizing proprioception via barefoot running or pure minimalist shod running remains the best strategy to improve motor learning and performance.

Again, the biggest problem with cushioned running shoes is they reduce physical input to the proprioceptors in the feet, causing perceptual suppression of your foot strike during forefoot running. Subsequently, sensorimotor function, which includes motor and joint function, deteriorates along with motor performance during forefoot running, and surprise: you end up with an injury. In support of this, Kernozek and Meardon (2014) favored the fact that altered proprioception contribute to running injuries because proprioception governs joint-position and plantar senses during running.

More research has confirmed that when proprioception is limited, motor learning and performance impairments escalate because our foot strike judgments and body position sense become increasingly skewed during running.

Another example is that inefficient ankle kinematics during running stems from ankle-reposition errors due to disruptions in proprioception, suggesting that cushioned running shoes leads to poor motor performance at the foot/ankle complex (Fu and Hui-Chan).

Ultimately, proprioception is the foundation for good forefoot running mechanics and the positive effects of increased proprioception results from the influence of regular barefoot running and activity and on the body’s ability to sustain smooth, fluid, safe and efficient motor performance.

Be sure to check out my other articles on the importance of proprioception in running.

Kernozek T and Meardon SA. Differences in joint position sense and vibratory threshold in runners with and without a history of overuse injury. J Sports Rehab, 2015;24: 6-11