Here’s how to take care of shin splints if you’re a runner! Keep on running!

Running with lower leg shin splints may be a blessing in disguise. Why? Doing so may improve your biomechanics, particularly at the foot strike level.

And, forefoot running has been used as a successful treatment strategy to eliminate compartment pressures in heel strike runners.

But what if a forefoot runner gets lower leg shin splint? What are they doing wrong?

They either lift their forefoot upon foot strike, or over stride, or both.

A common way a forefoot runner experiences lower leg shin splints is by lifting the forefoot (dorsiflexion) upon foot strike.

Likewise, heel strike runners lift their forefoot to strike the ground on the heel first.  Most joggers are heel strikers and shin splints is among the top 3 running injuries in joggers.  Connection?

Since forefoot runners make initial contact with the ground on the forefoot, there’s no need to lift the forefoot!

For the forefoot runners with lower leg shin splints, learn to relax your forefoot and do nothing. Let your forefoot fall softly to the ground. It may feel odd at first, but the human body may actually be hardwired to instinctively land in this nature on the forefoot when running. 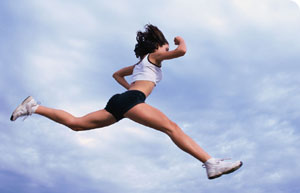 By nature, forefoot runners have a shorter stride length than heel strikers, as heel strikers tend to take lunge-like strides and over-stride.

Pretend there is a glass wall only a few inches in front of you and moves with you as you run. This mental cue restrains the urge to over-stride by allowing your feet to fall closer to the body and stop you from swinging your leg out way a head of you.

Why is over-striding a bad thing?

Running with lower leg shin splints is okay because the pain can be used as feedback to prevent you from lifting the toes and over-striding.

Relaxing the forefoot will relieve tension and pain in the shin. Working on maintaining a soft landing and relaxing the body is on going learning process in forefoot running.

Be sure to check me out on Facebook, it’s a great place to ask questions about forefoot running, barefoot running and injury. I’m always happy to help!

Run Forefoot Because You Are Faster Than You Think!