The Puma H Street and the Mizuno Wave Universe 3 are very popular minimalist running shoes for forefoot running. Both are zero drop, super lightweight, highly flexible and makes a perfect racing flat. However, I prefer the H Streets over the Universe 3s for many reasons.

, but the H Streets have a thinner, softer outsole that provides greater sensory feedback from the ground.

As mentioned briefly, the Mizuno Wave Universe 3 has more technology in the shoe than the Puma H Street. For example, the outsole of the Universe 3 is of an elastic thermal plastic material that forms a wave pattern at the heel, shown below: 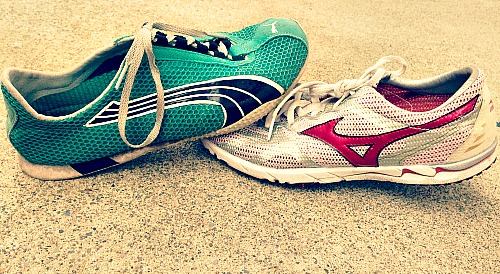 For the best minimalist running shoe for forefoot strike running, I choose the Puma H Street over the Mizuno Wave Universe 3. The design of the Puma H Street is very simple -no ‘shoe technology’ or fancy material, no ‘junk’ between you and the ground, thereby giving you a more natural feel.

The plastic material of the outsole in the Universe 3 obstructs the feet from sensing the ground. We all know that sensing the ground with proprioception is an important component to running properly on your forefoot. Since the Mizuno Wave Universe 3 were designed for heel strikers, it would make sense that the shoe would contain more shoe technology.

I have run in the H-Streets for over a year now, running every day, averaging 13 km, and the structure of the shoe has held up remarkably. Plus, I live in Canada where the winters are fierce, and despite running through sleet, slush, and snow plus the salt on the roads, the Puma H-Streets have proven to be exceptionally durable.

Above, is me running in the Puma-H Streets. The smaller heel makes it easier for me to achieve a proper forefoot strike as compared with the Universe 3. The H-Streets are also thinner which increases my joint attention and motor planning to help me land properly.