Hip injuries from running is one of the injurious consequences of a heel strike running style, mainly because the lower legs require greater stability by the hips. In addition, cushioned running shoes may also add mechanical demands on the hips during heel strike running as thick under-heel cushioning is related to encouraging a more forceful heel strike, including over-striding and greater braking forces, all of which takes its toll in the hips. 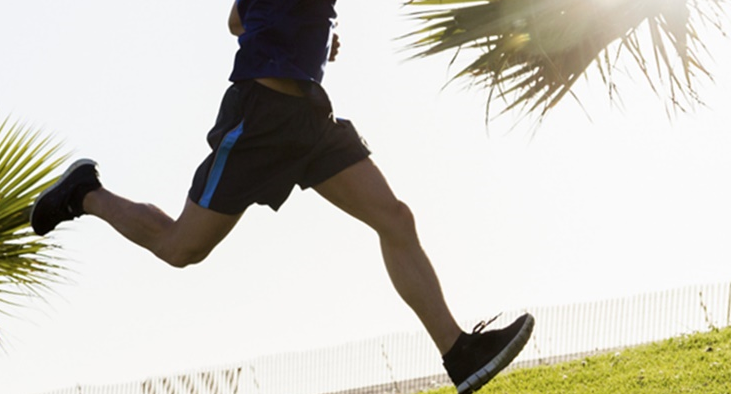 Cause of Hip Injuries From Running

We’ve heard that regular running shoes are linked to foot pain, such as plantar fasciitis. They are even linked to shin splints and runners knee pain. But now, regular running shoes are linked to hip running injuries. We have also heard that hip weakness can lead to hip injuries, or is this really true? Do we really need exceptionally strong hips to run? We do if you land with a heel strike, but not if you land with a forefoot strike, a running style that involves less impact production.

Hip running injuries are high in joggers primarily because of the type of shoes they wear for running.

Obviously advancements in shoe technology does little to protect the hip-joint in female runners because they are more prone to hip running injuries compared to men. Interestingly, in habitually barefooted populations, hip running injuries are uncommon between both genders.

As it turns out, hip running injuries may not be due to hip weakness after-all, rather bad running form.

From an evolutionary perspective, humans evolved to run with a forefoot strike and have not yet evolved to heel strike in running shoes. Therefore, our musculoskeletal system has not yet adapted to the repetitive high-impact forces of heel strike running.

To minimize the rapid impact at heel strike, runners wear athletic footwear with excessive padding under the heel which has been suggested to dampen impact by 10%. However, cushioned heeled running shoes changes the way we evolved to run.

Previous studies showed that heel strikers with knee injuries had significantly weak hip abductors. In such studies, mechanics and muscle strength are often measured together because it is assumed strong muscles equates to good running mechanics. However, Ethiopian and Kenyan distance runners, especially the females, also have weak hip abductors, but most of these runners are forefoot strikers.

Because the mechanics of forefoot running are different in that the center of mass is kept in front of the heel, hip weakness can be tolerated, suggesting that hip strength and mechanics are not related in forefoot running.

As mentioned above, East African runners have weak hips too. They also ran barefoot for many, many years, therefore you would think all that barefoot running would grant them stronger hips, but this is not so. And again, running hip injuries is uncommon in these runners. From this, it is reasonable to expect that strong hips are not required in forefoot running.

There is a strong relationship between heeled running shoes and heel strike running. There is also a strong relationship between heel strike running and hip running injuries. That is because shoe companies continue to manufacture footwear that cause runners to run with a slurry of abnormal mechanics that exaggerate joint angles, particularly at the hip and increase running impact loads to the hip as well.