A wide array of research during the past few decades has shown that running with a forefoot strike leads to significant reductions in mechanical and compressive loading on the knees, thereby potentially reducing the risk of runners knee as compared with running with a heel strike.

These radical improvements in impact loads on the knee-joint in forefoot running comes from improved foot positioning at touchdown (the foot lands closer to the center of mass), better dynamic stability of the ankle-joint, restrainment of abnormal foot postures, reduced ground-contact time which means the foot spends less time on the ground, resulting in less time for abnormal foot motions and postures to take hold and last but not least forefoot running improves stance-width (prevents crossover foot steps) all of which helps prevent altered joint mechanics, especially at the knee and leads to a reduction in net forces on the knee as well.

This is why many of those who switch from heel strike running to forefoot running have the largest improvements in knee pain relief rather than relying on increased underfoot cushioning or motion control stability constructs of a shoe. However, if you’re having some rough patches in your forefoot running journey that includes sore knees, adding a slight forward lean to your forefoot running stride maybe even better for runner’s knee injury prevention! 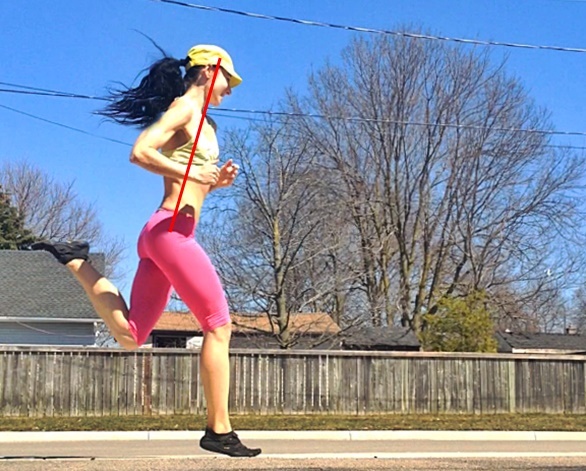 The hard truth is when it comes to running with much less mechanical stress and impact loads, your entire global biomechanics should come together in a manner that’s functional, not just solely how your foot strikes the ground, meaning that running with a forefoot strike is part of the solution, but not the entire solution in making running safer on your knees.

The better answer to runners knee prevention is there’s a strong relationship between upper body posture and knee-joint stress during running whereby ample research has shown that you get consistently good results in knee injury prevention when you lean forward in conjunction with forefoot striking when you run.

The researchers discovered that forefoot running without leaning forward resulted in greater knee external rotation at touchdown and during stance which increased dynamic knee valgus (the knee rotated inward, towards the midline), which is a known risk factor for increases in knee-joint stress (Huberti and Hayes, 1984; Powers, 2003) as compared with the forward-leaning forefoot running group. What this means is that there seems to be many opposing forces at work on the knee-joint which may cause excessive abnormal impact loading on the knee if you run too upright rather than lean forward.

So what are the special attributes about injecting a forward lean to your forefoot running stride that helps safeguard the knees from impact?

The researchers found that a 77% forward tilt of the trunk when running decreased ankle dorsiflexion, meaning the front of the foot lifted up less and was more pointed down towards the ground upon touchdown as shown below.

The researchers discovered that leaning forward during running seems to be a more functionally useful direction to orient your upper body because it helps improve foot positioning at touchdown whereby the researchers results showed that forward leaning during running decreased foot dorsiflexion which led to reduced dynamic knee valgus (the knee angulated away from the midline) which had the direct effect of blunting rotational and torsional forces on the knee. Related research has also found similar evidence that leaning forward when running decreased knee-joint stress by 6% (Teng and Powers, 2014).

The big takeaway is there’s accumulating research showing that it’s not just foot strike pattern that influences impact stress on the knee during running, but upper body positioning also has a large effect on knee injury prevention as leaning forward seems to be a key organizer of more functional foot strike mechanics that can make your knees much less vulnerable to the ravages of the road.