One of the main differences between forefoot runners and heel strike runners is not only in their preferred footwear, but the extent to which they use their lower leg muscles.

In heel strike running, movement behaviors are influenced by the standard running shoe which in turn produces an unintended result –muscle overuse syndromes.

Over and over again, heel strike runners seem to struggle with more injuries than forefoot runners. A lot of injuries are biomechanically-based in heel strike running because the inappropriate windless use of the foot influences many muscular overuse injuries of the lower leg.

Moreover, the footwear heel strikers wear have elevated heels which produces a conflict situation during running: a high inclination angle of the foot, which is associated with unfavorable outcomes at touchdown.

The standard running shoe causes the foot to rest on a high inclination angle at heel strike. In this position, there is a rapid spike in EMG activity in the tibialis anterior, which increases in frequency and intensity with speed.

Nonetheless, bigger and stronger frequencies in EMG activity does indeed lead to muscle overuse syndrome in the anterior compartment. If it didn’t, then humans would avoid shin injuries by a way of adaptively managing prolonged muscle activity. Humans have not adopted a strategy for tackling this, hence the high incidence of shin splints in heel strike runners. 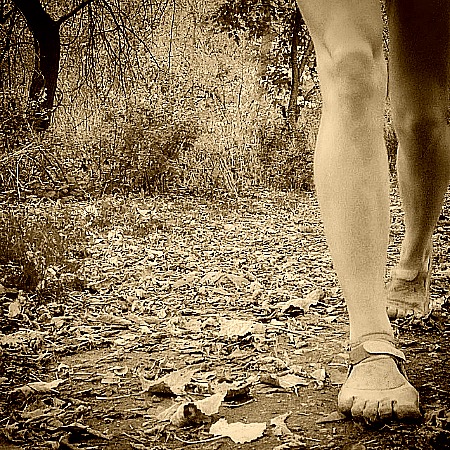 Presumably, forefoot running is an adaptive response to an unprotected heel under barefoot or barefoot shod conditions. Thus, a forefoot strike is a strategy to prevent heel pain during running. Moreover, a relaxed foot/ankle complex at touchdown seems to govern the process of avoiding heel strike in forefoot running thereby preventing muscle overuse syndromes.

More careful analysis of foot/ankle kinematics in forefoot running reveals that the long toe extensors are more relaxed at touchdown compared to heel strike running. When these muscles relax, EMG activity is low, suggesting that these muscles are less likely affected by overuse syndromes.

It is becoming more obvious that natural selection chose forefoot running based on it’s rewards and avoiding the wrong type of footwear is a guide to improvement in heel strike runners suffering from overuse injuries.