Your running balance often determines how well you can stave off injury. Good balance for running involves the neuromuscular system’s ability to maintain adequate body balance based on information from the outside (i.e. the periphery). The best possible way to improve body balance during running is to run in a shoe that allows you to feel the ground, running barefoot is even better.

When you are learning a new running technique, such as forefoot running, you can’t afford to be unbalanced via running in a shoe that is racking to your neuromuscular system. This is why super think cushioned running shoes are unfavorable during the beginning stages of learning forefoot running.

Barefoot and minimalist running is leaving a good track-record at helping runners learn forefoot running with greater dynamic balance control as compared with cushioned running shoes. Sadly, reports suggests that running in ultra-thick cushioned heeled running shoes may increase external loads because all this under-foot cushioning may complicate landing stability, and because of this, the upper body position, which is also known as the center of mass, may change, making it more mechanically demanding for the foot/ankle complex to keep good balance. 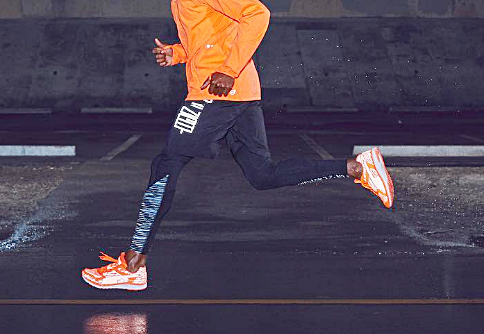 Runners who wear running shoes for support, that contain motion control features and lots of cushioning, have a much higher balance failure frequency rating than runners who run barefoot or in thin, flat, less cushioned footwear.

A study by Robbins et al. concluded that running support shoes that have softer, thicker midsoles were associated with a higher perception of comfort, but also a significantly higher balance failure frequency rating in runners.

How Would This Affect Performance?

Based on their data, the researchers concluded that thin running shoes are stability optimized shoes for runners and asserted that performance could be improved in these shoes.

Midsole thickness and softness has a negative impact on stability during running because such footwear triggers physical experiences that unconsciously influence poor judgment and impulsive landing behavior which spells disaster for runners, especially runners with muscle strength imbalances. Not only does running become more mechanically demanding, but injurious as well.

In all, based on the data from the current study, the researchers cautioned runners that as shoe cushioning increases, instability increases therefore, avoid the habit of optimizing foot comfort through choosing the most cushy running shoe. Based on this insight, cushioned running shoes should not be used for therapeutic interventions, rather comfortable running shoes with a thinner, less cushioned midsole should be preferred.

What is a Forefoot Strike?