The forefoot runners who made the biggest impression on me, that enabled me to fundamentally understand how I should swing my legs and how I should orient my foot before my foot strikes the ground, are Galen Rupp, Craig Mottram, Edna Kiplagat, Tirunesh Dibaba and her sister Genzebe Dibaba, Haile Gebselassie, Bernard Lagat, Molly Huddle and Tiki Gelana. These runners have one thing in common: they’ve won Olympic medals, placed in the top 3 in World Championship events, or they either consistently placed in the top 3 in any road race or track meet. 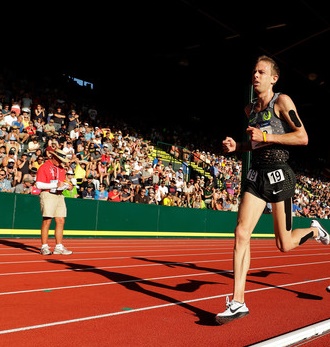 Therefore, when it comes to what more you can do to polish and improve your forefoot strike running mechanics, I would strongly encourage watching and carefully analyzing how these runners use their feet and legs to run appropriately. I also suggest watching them run at normal speeds (not in a slow motion) because watching how these runners run at regular speeds, enables you to get a good sense of their step frequency or step rate, which will also help furnish your forefoot running style.

Ultimately, I want to give you my point of view as to why it’s important to watch how elite runners run to help better guide you on your forefoot running journey.

How to Improve Your Forefoot Running Technique? Watch How the Pros Do It!

It turns out that repetitively watching videos of how runners run, may result in naturally mimicry, which means if you consistently watch and intensively observe the movement patterns and body posture of a runner, sooner or later, you will adopt those very similar movement patterns when you run.

For example, if you religiously watch Galen Rupp run, you will subconsciously inherit certain movement patterns that will show up when you run, and therefore, you will display very similar mechanical characteristics to that of Galen Rupp –which will probably make all your runner friends very envious!

Don’t believe me? The proof is in the scientific pudding!

A common belief holds that a runner cannot copy another runners running style. This is a myth that may be debunked by science. Dr. Bargh, a professor of psychology at Yale University states that people have a natural tendency to mimic and imitate the physical behavior of others -their emotional expressions, arm and hand gestures, their body postures, etc.

Therefore, if you watch enough YouTube video’s of the forefoot running styles of Tirunesh Dibaba or Kenenisa Bekele, eventually you will develop the tendency to spontaneously mimic and imitate how these runners move when they run.

The big bottom-line here is that if you experience difficulty with learning forefoot running, watch videos of the forefoot running technique of the elite distance runners that I listed above as this strategy may be an explicit road sign that instructs you on what to do next. Ultimately, watching videos of these runners may prompt the natural tendency towards behavioral synchrony, since the strongest form of mimicry occurs when two or more people engage in the same activity!

With my personal experience, the more I watched my favorite elite distance runner, Tirunesh Dibaba run in action, I became ‘primed’ to imitate her movement behaviors with respect to forefoot running and this had a positive impact on improving the quality of my forefoot running form. Try it. It really does work! And for the best effect, watch these videos before you go running.