Long ground contact time during running is not always a good thing because it allows more time for abnormal stresses and movements of the foot/ankle complex to occur. The problem? The more time your feet spend on the ground, the greater the potential for more force production on the body. This is what you don’t want. 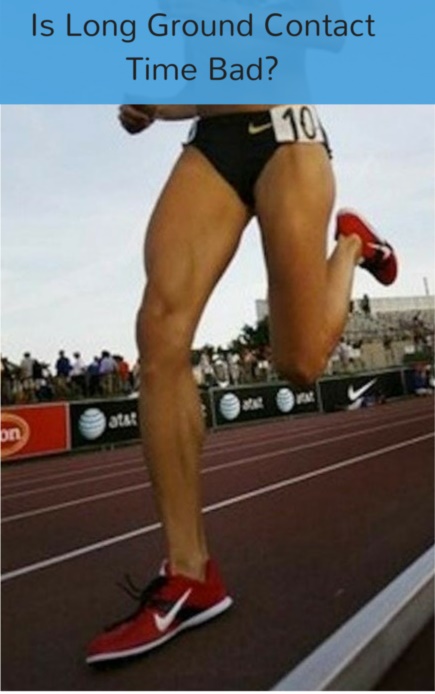 Ground contact time is the length of time of which the foot interacts with the ground and it begins at touchdown and ends at toe-off to initiate flight.

If you overpronate while you run, overpronation is prolonged if you heel strike, but is minimized with a forefoot strike since the foot spends less time on the ground in forefoot running.

The problem with long ground contact time in heel strike running is that it triggers abnormal stresses further up the kinetic chain.

For instance, as ground contact time increases, excessive pronation increases, leading to excessive internal rotation of the tibia which places abnormal rotational stress on the knee-joint.

Long ground contact time may also prolong the braking effect associated with heel strike running. In this case, the posterior tibialis works harder to restrain the forward movement of the tibia over the foot. As a result, angular velocities increase causing the muscles to work harder to control the foot and knee and may result in injuries such as tendinitis.

One of the best interventions to reduce excessive pronation is to run with a forefoot strike. This way, the feet have minimal interactions with the ground which cuts down on cumulative stresses to the body because there is less time for abnormal foot postures and movements to take place.

The Key to Proper Forefoot Running

McClay, I and Manal, K. A comparison of three-dimensional lower extremity kinematics during running between excessive pronators and normals. Clin Biomech, 1998; 13(3):195-203.