The sensory nerves of the feet send information to the brain about foot position and balance in order to improve movement smoothness, foot strike intensity and dynamic stability, especially at the knee. The best way to activate these nerves is by going barefoot, or wearing running shoes that mimic the feel of being barefoot.

In contrast, cushioned running shoes was found to decrease sensory acuity, not only in the feet, but in the ankles and knees, which had a negative affect on motor control, thus increasing the risk of injury (Bottoni et al. 2015). That’s why when it comes to running on challenging surfaces, like running downhill, especially on uneven terrain, you want to ensure that nothing interferes with the communication lines to the brain that begin in feet. 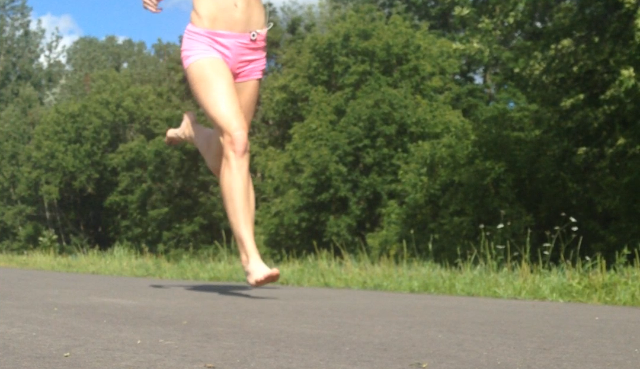 Nerves of the Feet Protects the Knees During Downhill Running

A study by Bottoni et al. 2015 demonstrated that cushioned footwear is worrisome to knee-joint health, especially when running downhill because they discovered when after walking downhill, participants had significantly worse joint-position in the lower leg than in the beginning, suggesting that downhill walking in cushioned footwear causes impairments in joint-position sense and could have crippling effects on the knee. These findings echo the concerns about the detrimental affects of running shoes on health.

Going barefoot, or pure minimalist –but remember, barefoot trumps minimalist– is the best proprioceptive (joint-position sense) weapon because the amount of positional information around the knee-joint to detect changes in foot position completely depends on the amount of sensory traffic entering and stimulating the sensory nerves in the feet. Academic research supports that increased sensory activity in the feet helps prompt the adaptations to steadily position the center of mass on the support surface through adaptations in ankle, knee and hip movements (Hoffman et al. 2001).

Our foot’s sensory nerves are too under-active in cushioned footwear. Without sensory information feeding into the feet, the risk of accidental falls and foot strike misplacement, especially while running, will continue. And, as the chance of injury increases in runners, so too, does the hostility and doubts toward running.

Who is Tirunesh Dibaba and why we should learn from her running style.