I always feel a little unstable running on the treadmill as compared with running outside, because of this, I much prefer to run outside. And, treadmill running was also the first to go when I began learning forefoot running because it just makes sense to run on a more stable surface, not a moving belt, when you are learning a new running technique. In opinion, you are better off learning forefoot running overground, and the research is in agreement with this, too. 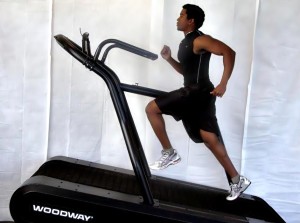 Running on the Treadmill, Not Such a Great Idea

It is well documented that treadmill running changes many biomechanical parameters, such as changes in stride frequency, contact time duration (which is the length of time the feet spend on the ground during the stance of running), as well as ankle, knee and hip kinematics, muscular activity, energy expenditure, shock attenuation, and plantar pressure –all of these may differ substantially between running on a treadmill and running outside. But, why do these biomechanical changes arise when you run on a treadmill?

In my opinion, it comes down to the fact that the treadmill is an unnatural entity for human running. And, in addition to altering biomechanics, treadmill running changes shock distribution in the foot and this is because the runner is trying to reach a stable, safe running pattern on the treadmill, and balance impairments arise as the speed of the moving belt on the treadmill increases, but these force pressure changes in the foot are not as apparent when running outside –because the ground is not moving.

Garcia-Perez et al., investigated the effects of treadmill running on plantar pressure in fatigued runners and found that ground-contact time was longer on the treadmill than in overground running.

The feet must spend more time in the air (increased flight phase) to lessen impact as well as the likelihood of some injuries.

As far as I know, most East African runners train outside and they do the majority of their running on a track or in wooded areas where the terrain is very uneven, which gives you better ankle strength. I’d rather train like they do, since they are the best runners in the world.

Overall, little research has been done on the influence of treadmill running on injury prevention in runners.

In my opinion however, there is something about running on a treadmill that seems unnatural and it would not surprise me if treadmill running contributes to injury to some degree.  And by the way, East African runners don’t run on treadmills either,  just saying.

Why Barefoot Running Is Really Important

Run Forefoot Because You Are Faster Than You Think!