The best minimalist shoes for forefoot running should allow a runner to feel everything on the ground, including every sharp pebble.

Put on your minimalist shoe and go for a run and purposely step on a pebble, or stone. If you cannot feel the stone to the point where you are unable to detect pain and reflexively withdraw your foot up, you may want to consider going to a barefoot-inspired shoe.

Most runners hate the feeling of stepping on a sharp stone and thus prefer minimalist shoes with cushioning. However, the rationale behind minimalism, and thus a minimalist shoe, is to promote natural running in the form of a forefoot strike and to go back to our ancestral roots, and run barefoot

. Or, at least in footwear that makes us feel like we are barefoot.

At home, we spend most of our time barefoot, or in socks, so we are familiar with how being barefoot feels. And, walking around your house barefoot feels comfortable, right?

Small Amounts of Cushioning may Cause Big Problems

You need to wear minimalist shoes that closely mimics the feel of being barefoot by giving you a true representation of the ground, not a shoe that feels like a foamy slipper.

Note, that it is okay for the shoe to have some level of cushioning and feel really comfortable, as long as you are able to feel everything you are running on.

If a minimalist shoe provides a completely different sensation compared to being barefoot, the difference in the feel of the ground related to the shoe bares plantar sensory consequences by which impact may be underestimated while running.

When running on pavement, a cushioned landing provided by the padded material of a shoe, produces a poor representation of how the ground should feel in order to optimize impact-moderating behavior.

This is referred to as a sensory illusion. Even the smallest amount of shoe cushioning has been found to enhance sensory illusions on the foot, causing one to mis-perceive the ground at each step when running.

Since shoe cushioning adds plantar comfort to your stride when running, the skill of moderating impact, adapted by humans throughout evolution, is inhibited.

You Are Your Own Cushion

To run safe, you need to tap into this ancient, reflexive pathway by running barefoot, or in a barefoot-inspired minimalist shoe. The ability to run safe, with less impact is within you, thanks to selective pressures.

Many runners fall victim to purchasing a minimalist shoe with generous amounts of padding because we all share that same fear in running: we don’t want to step on something sharp. But, really, this is such a miniscule worry. So what, you step on one, or two sharp pebbles during your run, causing you to withdraw your foot up. Be tough, own that pebble!

Over the last few months, I have been running in the Vibram Five Fingers (VFFs) and this is my preferred shoe now. 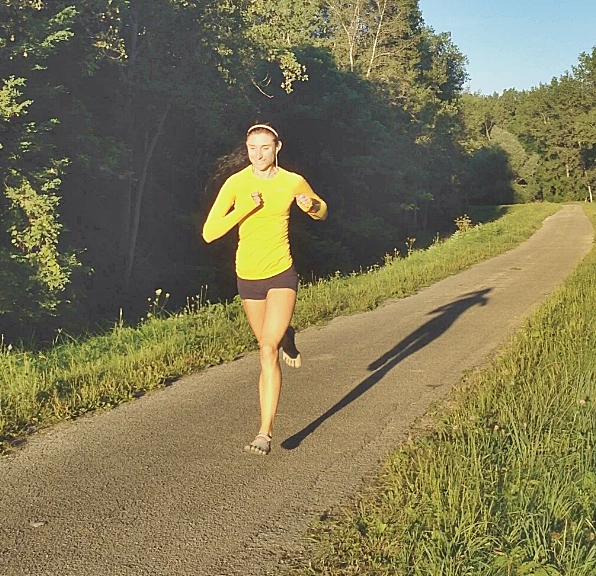 for about a year (below right).

The Puma H-Streets are quite comfortable considering how minimalist they are and you can still feel everything you step on.

The Puma-H Street was a great transition shoe to the VFFs because the thin, flexible sole is comparable to the rubber outsole of the VFFs which enabled me to make rapid improvements in my forefoot strike.

References:
Robbins, SE and Guow, GJ. (1991). Athletic footwear: unsafe due to perceptual illusions. Medicine and Science in Sports and Exercise.