Your brain is very energy demanding, therefore it is best to have your brain on ‘quiet mode’, or think non-running related thoughts while you run.

When you think about your biomechanics during running, the brain areas that become highly active, especially during max anaerobic conditions, are the prefrontal cortex, premotor and motor cortexes. 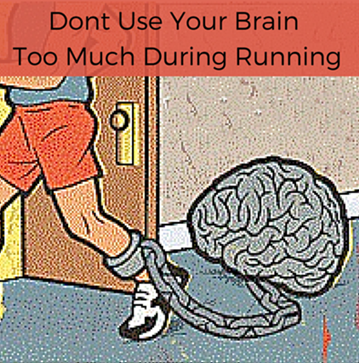 Dont Use Your Brain Too Much When Running

The prefrontal cortex, premotor and motor cortices work together to mesh decision making with regulating biomechanics.

Thus, running becomes mentally taxing if you over-think your mechanics because doing so increases cognitive load which increases deoxygenation and fatigue. On that note, the crucial factor might be that we are too attentive on our running form which may be causing us to actually underperform as compared with East African runners.

Ultimately, this finding suggests that East African elite runners are more energy efficient because they carry a lighter cognitive load. In other words, they are better because they pay less attention to how they run.

But why are East African elite runners less attentive on their running form and how does it keep their injury rates low as compared with most joggers?

The story begins with barefoot running: most East African runners ran barefoot for many years, which affected their ability to run, in a good way –they developed the proper running form, i.e. forefoot running— at an early age, allowing them to run with high efficiency and the capacity to avoid injury.

In a nutshell, running barefoot during childhood allows efficient running-related motor capacities to be hardwired, which may explain why East African elite runners are able to think less about their form, thereby freeing up energy in the brain as compared with runners who grew up shod.

Our biomechanics are indeed uniquely vulnerable to interference from shoe cushioning. Thick cushioning blocks proprioceptive input, and therefore disrupts the body’s use of the prefrontal cortex during running. And to top that off, a wide array of research over the last decade has linked heel strike during running to cushioned heeled running shoes.

Once you start heel striking, you tend to get injured. In all, these findings explain at least some of the traits that make East African runners better than us. However, we too can evolve this trait by spending more time running barefoot, and if you choose to wear shoes, make sure they mimic the feeling of being barefoot.

More on How to Use Your Brain Less When Forefoot Running:

What to Focus on When Learning Forefoot Running – Learn the difference between external and internal focus of attention and how they affect your ability to learn forefoot running.

Forget About Heel Striking – Leaving your heel striking thoughts behind will speed up your ability to learn forefoot running.

How to Use Your Feet – Learn to use your feet passively, not intentionally when forefoot running.

Footwear that Increases Proprioceptive Input – An overview of the best shoes that feel like you are barefoot, helping you acquire a consistent forefoot strike.