Ground contact is longer in heel strike running than forefoot running because of 2 factors: 1. a posterior position of the center mass at foot strike and 2. foot rollover causes the foot to spend more time on the ground.

If the center mass is behind (posterior) foot strike position as in heel strike running, ground contact time increases, shown below.

In contrast, if the center mass is more anterior relative to foot strike position, the ground contact time of the foot is much less, as in forefoot running. 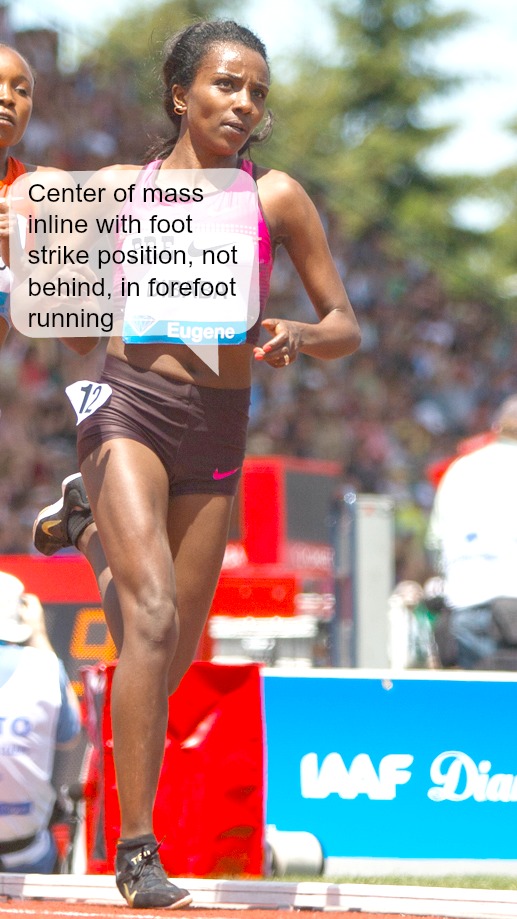 Foot Rollover = Too Much Interaction Between Body and Ground

Foot rollover is a major component of heel running mechanics and is not observed in forefoot running.

Foot rollover occurs after the heel has contacted the ground where the foot rolls heel-to-toe. However, this action keeps the foot on the ground longer compared to a forefoot strike landing.

Again, foot rollover in heel running transfers the center mass positioned behind foot strike to the toes where it is propelled forward.

Because the center mass is always pushing forward in forefoot running, the feet are not used to propel the body. Instead, the feet serve as platforms for balance and prevent the body from falling when running.

Having your toes spread is great for impact  absorption and balance during running.

Why you should avoid running too upright with your upper body posture.

Reviews and recommendations on barefoot-like running shoes for forefoot running.