Paula Radcliffe is currently the women’s world record holder for the marathon with a time of 2:15:25 hours. Radcliffe is known for her famous head-bob while she runs. At times, her stride looks very labor intensive, but her high running economy is heavily influenced by other biomechanical parameters, one of which is her forefoot strike landing which allows gentle contact with the ground by eliminating harmful impact transients associated with heel striking. 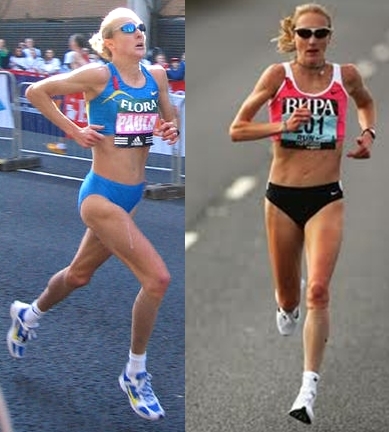 Paula Radcliffe May Look Inefficient, But Her Forefoot Strike Assists Her Victories

Despite Radcliffe’s pronounced head-bob and choppy arm-swing, the contractile elements of the hind leg are fully optimized with forefoot running and makes Radcliffe a highly efficient marathoner.

Forefoot Running is Relevant Across All Distances

Many associate forefoot running with sprinting. However, most elite long distance runners, such as marathoners like Radcliffe, utilize a forefoot strike over a heel striker for many reasons.

A vital component to running safely is to interact safely with the ground at each step. Running with a heel strike over the distance of a marathon, especially at the speed of Radcliffe, may expose the body to greater shock.  The requirements to reduce shock when running has been evident in a forefoot strike landing.

One thing is clear is that Radcliffe shares the same style of running with respect to foot strike as Ethiopian runners Tirunesh Dibaba, Haile Gebreselassie, and Kenenisa Bekele, who are all forefoot strikers and are among the best in the world.

Since genetic predisposition has been poorly linked to performance in Ethiopian runners, many experts think that specific biomechanical parameters such as the forefoot strike, plays a marked role in the eminent success of many Ethiopian long distance runners as well as Radcliffe.

Radcliffe is also the current world record holder for the women’s road 10k, in a time of 30 minutes and 21 seconds. At the 2005 London Marathon, Radcliffe won with a time of 2:17:42, a world’s best time for a women’s only race by over a minute.

7 Benefits of Running in Minimalist Shoes

P.S. The Run Forefoot Facebook Page is a great place to ask questions related to forefoot running mechanics, injury, barefoot running and footwear. I’m always happy to help!
Run forefoot, you are faster than you think!