From a mechanical and an injury prevention perspective, does forefoot running improve performance? Yes it does and it’s all thanks to how forefoot running saves more elastic energy and reduces the impact transient as compared with heel strike running. 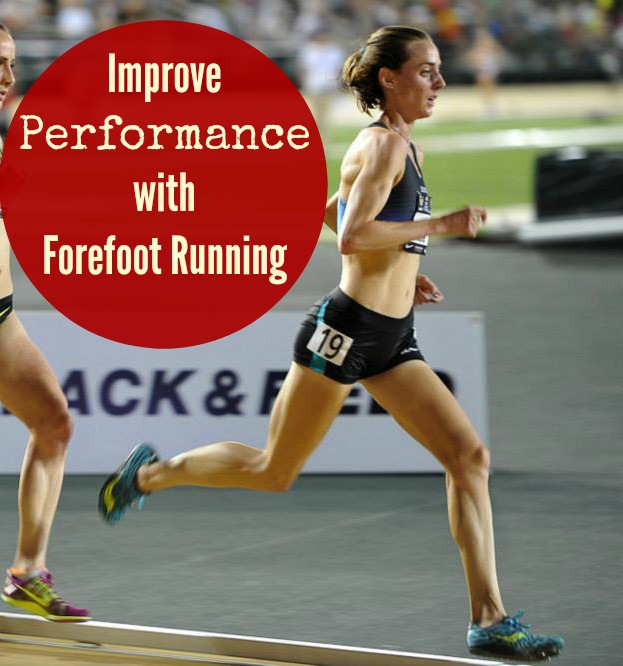 Let’s look at in detail the energy-saving mechanisms of a forefoot running style:

Heel strike runners and forefoot runners bounce when they run, but the nature of the bounce differs between the two style of running.

In contrast, forefoot runners have an elastic bounce due to a forward lean, high knee flexion and ankle plantarflexion.

Thus, the main difference between elastic and mechanical bouncing in running is that an elastic bounce uses more elastic strain energy stored in the tendons instead of muscular power.

Another reason forefoot running boosts running economy is by not fighting the force of gravity like heel strike runners tend to do by running too up-right.

In forefoot running, the entire body is continuously falling. According to Pose Running, when the foot strikes the ground under the knee, not in front, it is quickly removed from the ground by the spring-action of the leg.

In contrast, gravity works against heel strike runners because they don’t lean forward and as a consequence, the legs are required to pull the center of mass along the way.

A continuous body-fall in forefoot running utilizes more spring energy from the tendons of the hind leg and not from the muscles thereby forefoot running is indicative of less muscular demands than heel strike running.

As mentioned above, forefoot runners do not use their lower leg muscles the same as heel strikers.  Forefoot runners rely more on gravitational forces to propel the body forward such as at each step, the legs  ‘get-out-of-the-way’ and swing rearward behind the body.

Conversely, heel strikers work against gravity to propel their body forward.  Heel strikers launch their body with their forefoot and toes which not only increases muscular work, but may strain the toes, or the Achilles tendon, possibly leading to injury, and injury means more time injured.

Consistent training is key for improving endurance capacity. Forefoot runners may experience fewer injuries, which may allow an advantage over heel strikers who are frequently injured, to train on a consistent basis. Another key thing to remember is running faster in forefoot running will maximum energy elastic energy storage.

More on the Health Benefits of Forefoot Running: