Many forefoot runners want a high back kick, but you have to remember that back kick height is a function of running speed: the faster you run, the higher your back. Forcing a high back-kick however, may lead to fatigue leg pain, especially in the hamstrings. 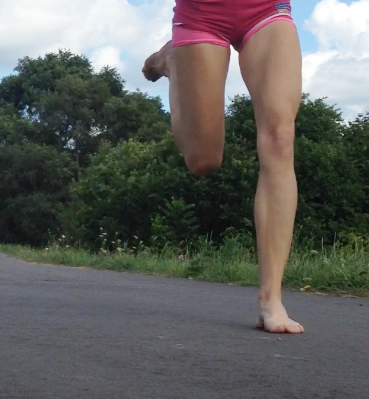 How to Prevent Fatigue Leg Pain When Forefoot Running

Pose Running suggests quick removal of the foot off the ground via firing of the hamstrings fuels forward momentum when running and is more energy efficient than letting your leg trail behind.

In my opinion, the best way to optimize foot pulling without burning out your legs is by running barefoot, or at least do most of your training barefoot.

Foot Pulling is a Natural Mechanism

If forefoot running is how humans were built to run, it would follow that its biomechanical components occur reflexively –this includes foot pulling during stance, which is directed by the flexor-reflex pathway in the spinal cord.

How the Flexor-Reflex Helps Us Run Forefoot Effectively

The flexor-reflex is a more active participator in barefoot-forefoot running than in shod running. Part of increasing the activation of this reflex is proprioception, which can be fully maximized when barefoot. Furthermore, the mechanics of forefoot running prompts the flexor reflex by engaging the spring capability of the Achilles tendon and arch, helping yank the foot off more easily and naturally.

To prevent us from falling down when barefoot-forefoot running, the extensor muscles activate and the flexors on the opposite side become inhibited.

What does all this mambo-jumbo mean? You are better off forefoot running barefoot to relax your legs as there is no need to force the pulling the foot because this action is under reflexive control.

When you force your leg movements during running, you open yourself up to fatigue weak legs. It is important to understand that foot removal is a natural reflex that humans evolved because we evolved as barefoot runners. For the most part, this is why doing your running training 95% barefoot, improves the leg’s reflexes.

By letting the flexor reflex take over, instead of applying excessive conscious effort that overloads the hamstrings, just let it happen -let your leg draw the foot up off the ground on its own (reflexively) which will reduce hamstring soreness and cramps.