Pain on shins during running can be caused by heel striking as heel striking is strongly associated with increased plantar flexor stiffness which increases the ground reaction force on the leg.

Landing with a heel strike may increase ankle plantar flexor stiffness –a risk factor for shin fracture [1]– because the ankle is hyper-dorsiflexed upon and at touchdown. This results in impaired shock absorption in the lower leg, causing shin pain and even injury to the shin bone. 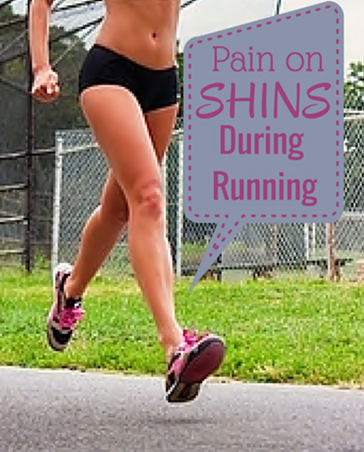 Pain on Shins During Running

The high magnitude of the ground reaction force that naturally occurs in heel strike running is an underlying cause of bone tissue micro-damage that contributes to a broken shin bone [2-7], and is amplified when the plantar flexors are stiff.

The data implies that heel strike running does not sufficiently attenuate impact because is causes stiff ankle plantar flexors which become poor shock absorbers, thereby causing the ground reaction force to be greater.

A good way to start running with less impact on the shins is with forefoot running because the ground reaction force is naturally lower as well as the incidence of shin fractures, suggesting that plantar flexor stiffness might be lower as well as compared with heel strike running. Furthermore, the joints of the lower leg are more compliant in forefoot running and may help reduce the transmission of mechanical shock up the body [5].

To get the most out of your forefoot strike, try running barefoot as it forces you to avoid landing directly on the heel.

[1]. Pamukoff DN and Blackburn TJ. Comparison of musculotendinous stiffness, geometry, and architecture in male runners with and without a history of tibial stress fractures. J Appl Biomech, 2015; 31, 41-47.