In heel strike running, the anterior lower leg muscles pulls the forefoot up at touchdown -doing so allows heel strike, but also makes the leg get tired faster. 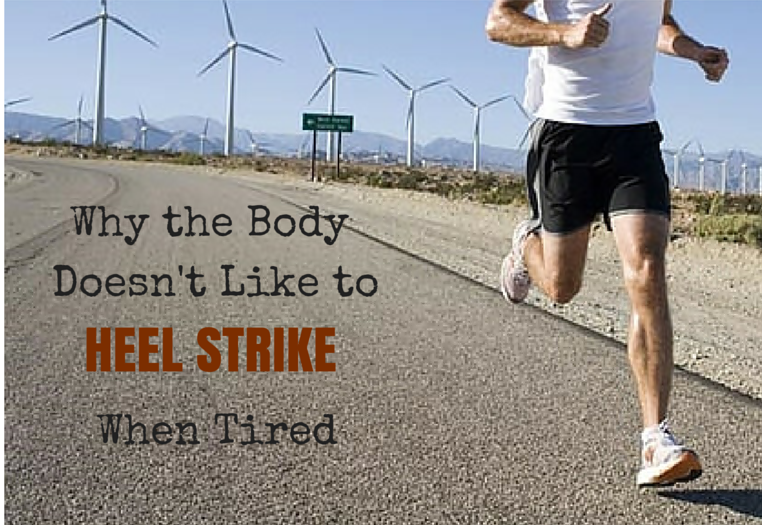 Why the Body Doesn’t Like to Heel Strike When Tired

A study by Willson and Kernozek [1] found that heel strike runners adopted a midfoot strike landing towards the end of a run, that is, when the runners were tired.

As mentioned above, to allow heel strike, the anterior lower leg muscles pull the forefoot back prior to and at touchdown.

Forefoot pulling is daunting on the shin muscles, and is what shin splints thrives on —anterior shin splints is a function of overstressed and strained anterior lower leg muscles [2].

To give the anterior lower leg muscles a break, a heel striker unconsciously switches to a midfoot strike to get the job done, and conserves more energy by doing so.

Equally important, in forefoot running, the anterior lower leg muscles are inactive at touchdown, there does not seem to be any reason this landing strategy would lose energy. This is inline with the notion that evolutionary pressures for forefoot running existed long before heel strike running because to hunt all day, our ancestors needed a running style of efficient energy usage.

Regarding the evolutionary pressures to run forefoot, the theory goes, the body evolved a forefoot strike landing strategy to use energy wisely, limiting muscular output of the lower leg. Moreover, research has yet to find convincing evidence that forefoot running causes anterior shin splints, whereas there is an unprecedented number of heel strike runners who suffer anterior shin splints.

And finally, another reason the body shifts away from heel strike under fatigued conditions is to preserve good foot health. Alfuth and Rosenbaum [3] argued that under minimalist and barefoot conditions, runners landed forefooted as a strategy to bring relief to the heel. Similarly, habitual minimalist and barefoot runners refocus their attention away from forefoot-pulling at touchdown to land softly on the forefoot and the result is a no-brainer –most of these runners are less likely to have experienced anterior shin splints or heel pain when fatigued.

The Real Cause of Running Injuries

Improve Your Running Form by Watching the Pro’s

The Dangers of Running Slowly