You may think you are forefoot striking in a minimalist shoe, but there is a high chance you might slip up and heel strike a lot more than you think. 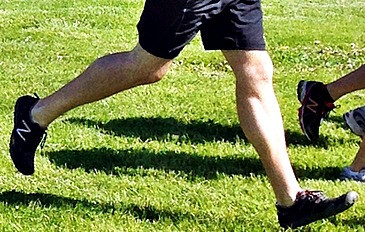 Because many of the minimalist shod runners had a strong tendency to unintentionally heel strike, the researchers concluded that the accuracy of self-reported forefoot strike pattern was poor in runners who wore minimalist footwear. These runners also produced a vertical impact force, the same force produced in heel strike running, which causes injury.

In terms of negative reinforcement, running barefoot excites plantar proprioceptors that promote reflexive responses while also inhibiting actions that would lead to high impact landings. At first, the feel of the ground while barefoot is perceived as uncomfortable, however this triggers positive reinforcement, promoting impact moderating behavior, allowing a barefoot runner to make the ground feel comfortable on their feet.

The data implies that it is common for minimalist runners to have a weak response to foot strike errors, suggesting that proprioception exerts its effect on learning from sensory feedback. To worsen the scenario, many types of minimalist running shoes contain too much cushioning for the shoe to be considered minimal. The result is insensitivity to unpleasant impacts during running which blatantly contributes to injury.

The trick is to aim for a more proprioceptive-based forefoot running learning strategy which includes graded bouts of barefoot running to improve the brain and body’s responses to subconscious and conscious errors in foot strike. This in turn, will help prevent you from goofing up on your foot strike without knowing it in your minimalist footwear.

Davis I, Bowser B, Mullineaux D. Do impacts cause running injuries? A prospective study. Paper presented at: 34th Annual Meeting of the American Society of Biomechanics; August 18–21, 2010; Providence, RI.

Davis I., Bowser B, Hamill J. Vertical impact loading in runners with a history of patellofemoral pain syndrome. Paper presented at: The 57th Annual Meeting of the American College of Sports Medicine; June 2–5, 2010; Baltimore, MD.