As runners age, so do the heel pads! Age-related heel pad atrophy makes heel strike running damaging to older runners as the shock-absorbing capacity of the musculoskeletal system fades with age [1], leading to higher impact peak forces that contribute to overuse injuries [2]. 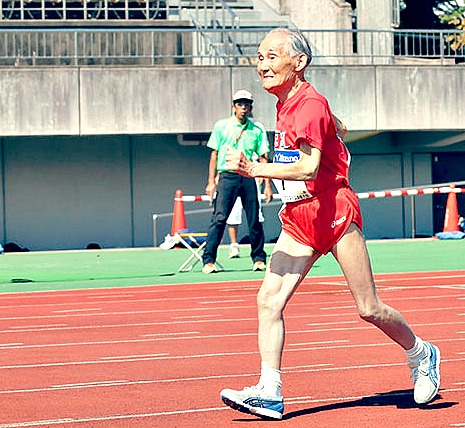 The study found that older runners (55-65) who were heel strikers, produced a higher impact peak force and loading rate compared to younger runners (adolescents), who were also heel strikers.

Interestingly however, the older runners had a shorter stride and greater knee flexion –kinematic variables that reduce impact– yet they managed to generate more impact than the younger runners.

Based on the results, older runners who heel strike are more likely to generate higher impact during running and the age-related loss of muscle strength and shock absorption causes pain and injury to be more constant [3-7].

Forefoot Running to the Rescue!

Because impact peak forces precede pain and injuries in runners, avoiding heel strike during running will help reduce incidences of repetitive stress injury. Knowing that the heel pad loses elasticity with age hints that older runners would benefit more from forefoot running as a shortcut to avoid injury. This is because running with a forefoot strike suspends impact from the heel. Click here to see what a forefoot strike looks like.

Wearing zero-drop, minimalist running shoes is also essential to forefoot running as there is lots of evidence that zero-drop shoes facilitates a forefoot strike.

In all, most running injuries are framed as being impact peak-related. Because forefoot running abolishes impact peak forces, older runners stand to gain from adopting this style of running. So, older runners struggling with injury need to make impact reduction feasible by ditching their heel strike and their cushioned heeled running shoes.

One of the best ways to improve your forefoot running form is by running barefoot.

Humans were born to run, but to do so on their forefoot.

Find out why the risk of injury increases during heel striking when you’re tired.