Run with your center of mass, not your legs. At least that is what Pose Running eludes too. This means that to initiate running, push your center of mass forward and keep it there. This is needed to not only run forefoot fastly, but to do so smoothly and unless you resign yourself from extending the swing leg way out in front of you, your chances of getting good at forefoot running falls short.

Pretend there is a barrier in front of you that is stopping you from over-reaching with your leg at each step. 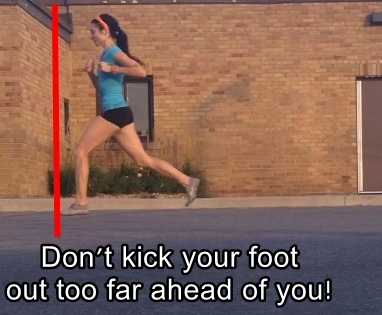 This causes the foot to land closely under you. However, the trick is to hold your center of mass in a stable forward position and the only way to get good at it is practicing surges.

Practice keeping your center of mass more in front than back (reduce your vertical sway). The best runners in the world have less vertical sway, allowing them to balance more easily (Novacheck, 1998).

Below is a video showing how to use a forward position of the center of mass to initiate running.

Notice the runner pushes forward with his torso (i.e. center of mass). This is exactly how you should look –minus the arm pumping and grimacing facial expression– but nonetheless, the runner is not holding his torso straight up, instead he uses his torso to lean into his stride in order to initiate running. Torso first, legs follow. This will give you more opportunity to build speed without much leg work.

Get Good at Holding Your Forward Tilt

If you don’t lock your center of mass into a more forward position during forefoot running, the difficulties of running safe and efficient quickly turn exponential –there is always another layer of de-rail when vertical sway increases: longer stride length, greater press force, more braking.

Holding your center of mass more forward provides more propulsion that doesn’t involve forefoot pushing, hence lower press force. This is why runners who keep their center of mass back, or posterior during running, have more intense and longer duration in press force which may subject the runner to leg and foot injury.