In 2014, Kenenisa Bekele made his marathon debut in Paris and won, of course. Shortly after, Bekele’s training was derailed due to an Achilles injury, causing him to withdraw from the upcoming London Marathon.

Indeed, many factors contribute to Achilles problems in marathoners, but you would think elite’s like Kenenisa Bekele are conditioned enough to avoid such an injury. Alternatively, one factor implicated in Achilles injury is foot strike. 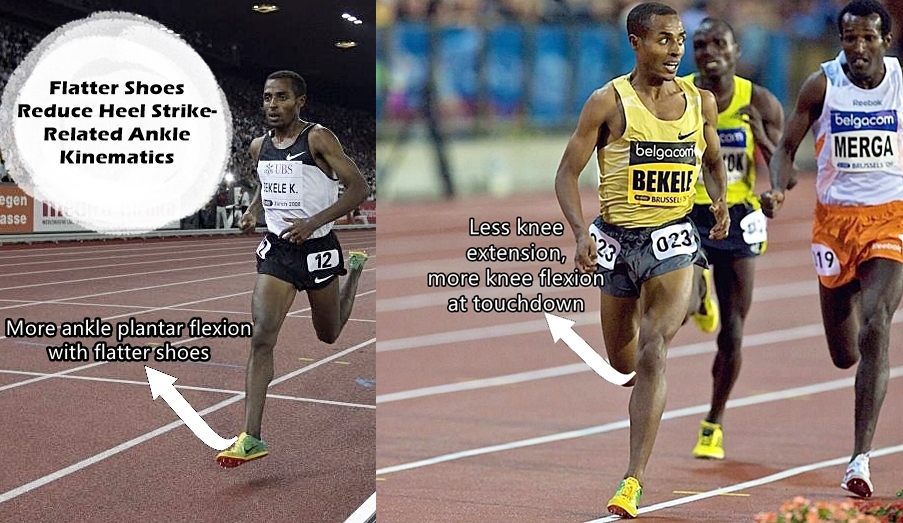 Essentially, racing flats give a better ‘ground feel’ thanks to greater information sent from the plantar proprioceptors to the somatosensory cortex and brain stem which initiate impact-reducing movements. However, on the roads, Bekele wears regular running shoes which interfere with these proprioceptive processes, subsequently triggering high impact movements.

Researchers have catalogued the impact variables associated with running-related Achilles injury, these include high ground reaction forces and loading rates in the vertical direction –both of which are higher in heel strike running than in forefoot running.

Regular running shoes attract Achilles injury by reducing proprioceptive fields, resulting in faulty movement behaviors during running. This can be seen in the picture below, of Bekele showing a strikingly different landing strategy in regular running shoes as compared with racing flats. 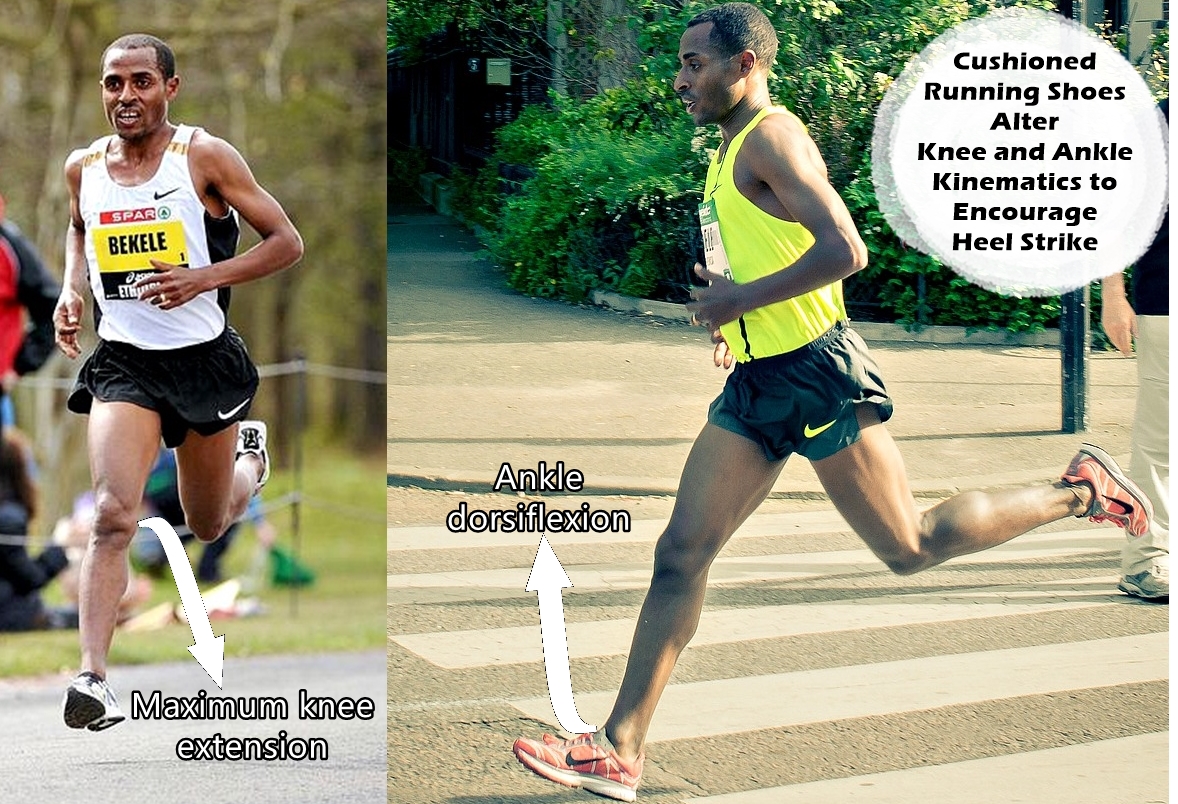 This is nothing out of the ordinary because most habitually shod joggers run like this. Like most shod joggers, Bekele demonstrates more knee extension and ankle dorsiflexion at touchdown in regular running shoes as compared with his racing flats. These actions create an ocean of problems on the Achilles tendon.

What if Bekele wore racing flats during his marathon training and competition? At least he would have expressed the primivate standards of forefoot running –simulated barefoot-like mechanics.

But isn’t Bekele well-adapted to sustain his forefoot strike in regular running shoes?

The problem is, adequate forefoot strike mechanics depends on the intensity and patterns of proprioceptive signalling. In all cases, compressible materials affect proprioceptive input, output and feedback loops, resulting in a number of interrelated challenges that such an habitually barefoot runner would have to overcome. Ultimately, researchers have a good idea of how joints and reflexes work –they respond accordingly to proprioception. From this, the predicted outcome is easy to understand — if you don’t have enough proprioception, you are going to have irregular responses in movement.

Achilles injury suffered during marathon training is labelled as an ‘overuse injury’ when it should be labelled at as an impact-related injury due to proprioceptive dysfunction. Based on Bekele’s shod-induced foot strike variability on the road, the sudden alteration in foot strike probably led to an extremely sharp rise vertical transmitted force, which caused his Achilles injury, not the increase in mileage.