In my mind, heel strikers must really hate running because they tend to get injured more than forefoot strikers. You can really grow to hate running when you have injury after injury. Trust me, I can relate because I have been there when I was a heel striker and always struggled with leg, ankle and foot injuries.

Experts now know that the stress wave at heel strike makes heel strike runners injury-prone. How come? Compared to other body segments, the lower leg pays the price for absorbing the impact produced at heel strike. 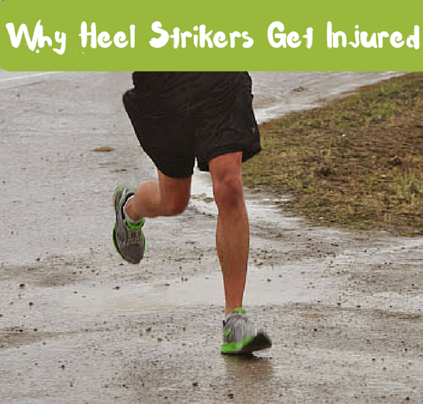 Why Heel Strikers Are Injury Prone

Light et al. (1980) reported that lower leg injuries arise in heel strike runners because the lower leg, knee included, must absorb 50%-90% of the stress wave generated at heel strike. This is tissue-expensive because the leg muscles use more energy to attenuate impact.

To give the tissues a break, rest or reduced mileage is the THE recommendation for heel strike runners. But what is remarkable is that forefoot running does not generate a stress wave and can prevent lower leg injuries. And, the forefoot and ankle absorbs the minimal impact produced during forefoot running.

A forefoot strike stops the flow of impact up the leg by localizing impact absorption to the areas of the forefoot and midfoot and the rapid rise in force associated with heel impact is not apparent (Lees et al. 2015).

Of course, there’s the concept of ‘muscle tuning’ which dampens impact at touchdown, however the high injury rate among heel strike runners casts grave doubt that muscle tuning works for them. Moreover, the fact that barefoot runners consistently run without a stress-wave through a forefoot strike landing, suggests that forefoot running has strong biological roots that formed in our evolutionary history.

Nike Frees – Are not a good shoe for forefoot running because they are not ‘barefoot’ enough.

Toe Striking – Toe striking is different from forefoot running and may cause injury.

Barefoot Running – You cannot run properly until you have run barefoot.

Dealing with Transition – There are no overnight fixes when it comes to learning a new style of running. Be patient!