I want to know everything about Galen Rupp training regiment. Thankfully, I found out 2 main ingredients to his high-performance forefoot running ability: doing speed work under fatigued conditions and the forward-lean.

Galen Rupp Training – How He Got So Fast

In the January, 2013 issue of Running & Fit News, Alberto Salazar, who also coaches Mo Farah, revealed that Rupp does hard fartleks (almost all-out sprints) at the end of his speed workout. In this vision, the legs are essentially trashed after a regular speed workout session.

Stacking on more speed work at the end of your run is actionable because it allows you to blast-away at the end of a race with a better energy budget.

Doing speed work at the end of your run essentially reboots the legs, but the real goal is to harness the efficiency of your forefoot running mechanics when pushing through fatigued conditions.

2. Lean Forward to Get Higher Back-Kick

Galen Rupp has a very high back-kick. Before training under Salazar, Rupp ran with an upright-trunk. Now, he leans forward (but not too far forward), letting his feet drop under him or close to his center of mass –doing so ceases forward leg extension, thereby freeing up more time to deliver a higher back-kick. 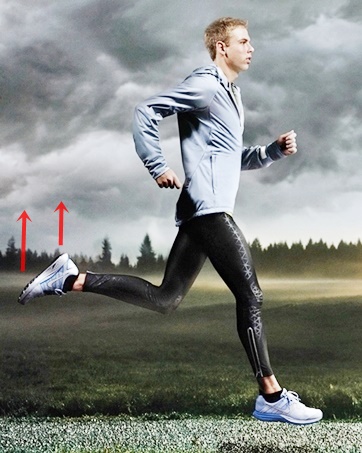 When it comes to improving running performance, you really need to change the way you think about speed work to get the gains. Most runners think speed work is dangerous, but not if a forefoot strike is used. Ethiopian runners –most of which run forefooted–do speed work every day in the morning! Likewise, Salazar makes it clear that speed work is safe, if the proper forefoot running technique is employed.

More on How to Boost Running Performance: