A study by Weist et al., examined the effects of muscular fatigue on metatarsal stress bone fracture development in tri-athletes who were heel strikers. The study found that increased fatigue led to alterations in foot rollover which increased peak pressure forces and impulse under the second and third metatarsal head, and under the medial forefoot. 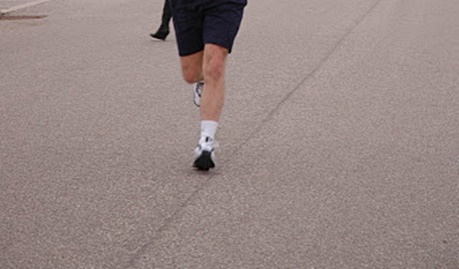 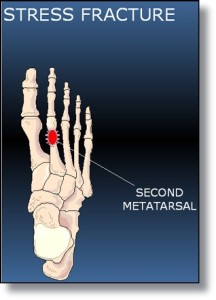 Unlike forefoot striking, heel strike running involves propelling the body weight forward with the forefoot and toes after foot rollover.

You would expect forefoot runners to have higher loading in the forefoot because the forefoot initially contacts the ground, but this is not the case.

In forefoot running, plantar pressure is localized under the 4th and 5th metatarsal head, ground-contact time is lower, and fatigue loading is lower because heel-toe rollover does not occur and neither does toe-off.

In forefoot running, global plantar pressures and forefoot loading is lower since the forefoot is not used to propel the body forward.

In any case, every runner can use stronger metatarsals, especially forefoot running and barefoot running newbies. Performing basic, strengthening exercises for the feet daily is the best defense against this painful, dreaded injury.

Weist, R., Eils, S and Rosenbaum, D. (2004).  The influence of muscle fatigue on electromyogram and plantar pressure patterns as an explanation for the incidence of metatarsal stress fractures. Am J Sports Med, 32(8):1893-8.