Stretching exercises before running was thought to be a major necessity to help loosen-up the body and prevent injury. Although the magic formula for optimal running economy and injury prevention involves forefoot running through barefoot adaptations, it certainly does not include stretching exercises for running. 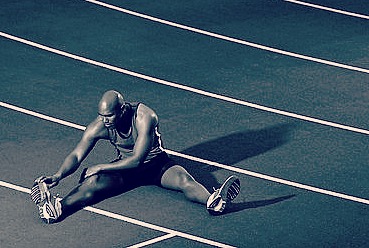 Stretching Exercises Before Running Spoils a Runners Balance and Performance

According to past reports, stretching exercises for running, usually performed before running, can be hugely debilitating on performance and health.

These finds are a reminder of a more basic truth: our barefoot running ancestors were better endurance runners than the average modern-day jogger and they never stretched.

A long line of fascinating and attention-grabbing studies revealed why runners should think twice about stretching before they run.

For instance, Gleim et al. reported that the most economical runners were the least flexible and were most economical between running speeds of 3 kph to 11 kph compared to runners who stretched. Moreover, the less flexible runners appeared to have better pelvis stability at touchdown.

Last but not least, one study found that trunk inflexibility was related to better running economy in international standard male distance runners.

The most provocative findings come from studies that show stretching influences the spring-behavior of the leg in a way that impairs running economy.

Spring compression, also referred to as elastic energy storage, is why forefoot runners are more economical than heel strike runners.

The anterior position of the center of mass literally compresses the tendons of the hind-leg during stance in forefoot running (think of hopping up and down on a pogo-stick).

Further, the eccentric phase of forefoot running allows the Achilles to suck up tons of elastic energy. But to maximize elastic energy storage, you need a nice, tightly compressed spring (tendon).

What would happen if you continuously stretched a tightened spring?

Based on the facts, there is nothing particularly helpful with stretching exercises for running.

For some reason, many runners are unable to abandon their pre-run stretch routine primarily because they associate good flexibility with running efficiency and better joint, muscle health etc. This prevents runners from overcoming the preconceived notion that stretching equals safety. Yet, the findings from follow-up studies expose the underpinnings of reduced running economy which includes stretch-induced flexibility.

If you are a newly transitioned forefoot runner who struggles with quirks here and there, ditch stretching all together, for a few weeks until your body adjusts, and see what happens. At least doing so will bolster your running economy.