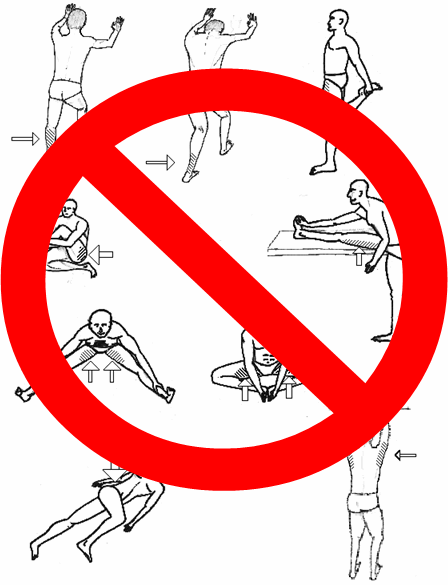 Many runners who learn forefoot running sometimes get off to a rocky start. They either land incorrectly on their forefoot or they are not wearing zero-drop minimalist footwear and as a result, end up with aches and pains or injury and conclude that forefoot running is not for them.

However, forefoot running learners who experience soreness or minor injury might be landing properly in the right minimalist shoe, but stretch statically before they run.

The rationale behind forefoot running is to restore the way the human body was evolutionary built to run and I highly doubt that our ancestors, who were impressive endurance runners, stretched before their 14-km daily run to catch dinner.

Therefore, pre-run static stretching could be your problem and not your forefoot running technique.

A recent study by Damasceno et al., provided more reason to believe that static stretching is unnatural to the body and might not be required to run safely.

The researchers looked at the effects of static stretching on performance and pace strategy in well-trained male endurance runners with personal bests (PB) of around 35 minutes for 10-km.

Many of the static stretch exercises were unassisted, however with a 35 min PB for 10-Km, the runners probably did not need help with stretching at that caliber.

Each stretch was performed before running and each static stretch exercise was to be held for 30 seconds.

Using a 3-km time trial, the researchers found that pre-run static stretching did not affect the caloric unit cost of running, but resulted in a slow-start strategy and a higher rating in perceived exertion during the first 800m.

The pre-run stretch runners also showed much higher muscle activation in the bicep femoris and greater stride time than the runners who did not stretch before running.

Yet, pre-run stretching compromised pace strategy and was related to the reduced ability to produce force, an indicator of impaired neuromuscular function.

The data from the study is also inline with other work that found a relationship between static stretching and impaired neuromuscular function which involved changes in isometric peak torque and range of motion.

The study was the first to link pre-run static stretching with impaired neuromuscular function and pace strategy in long distance runners.

Many runners dedicate at least 10 minutes to static stretching before running, but continue to stretch before each run because the soreness or cramping comes back. Maybe stretching is the problem.

In the case of forefoot running learners who stretch before running because they are sore, the runners are most likely sore not from forefoot running, but are sore because pre-run stretching impairs the natural motor strategies that regulate pace, biomechanics, and other neuromuscular variables related to safe, natural running and consequentially, may promote unfavorable interactions between the body and the ground.