With all the running shoes to choose from, they all have one thing in common = too much cushioning. You’ve probably ran in them, I did at one time, and you’ve probably got injured, too. Here are a few things about your cushioned running shoes that you should keep in mind. 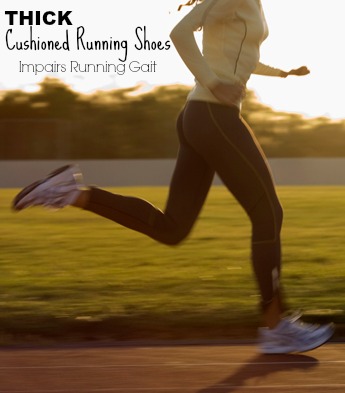 Running shoes with heel cushioning facilitates a heel strike landing which produces an impact transient that converts into a shock-wave that, over time, causes degenerative joint problems in addition to musculoskeletal injuries [1,2]. How do we know this? The proof is in the pudding.

The multiple forces produced in a running shoe-induced heel strike landing are linked to common running injuries such as runners knee and shin fractures.

Even worse, thick heeled running shoes are very inflexible, giving rise to the idea that such footwear causes foot weakness by limiting plantar reflexes and muscle activation.  This is how the muscles, tendons, and bones of the foot become susceptible to atrophy.

Ample studies found that minimalist footwear tremendously improves foot strength and in most cases, promotes a forefoot strike over a heel strike landing during running.

Many joggers underestimate proper running shoes, unaware that too much shoe cushioning encourages a foot strike that is all too forceful.

But, is there a right or wrong way to run?

According to Lieberman et al., before modern running shoes, humans not only ran barefoot for millions of years and later on in very, minimalist type footwear such as moccasins or thin sandals; it would make sense that to run safely barefoot, early runners adopted a forefoot strike because impact landing forces are much smaller regardless of surface hardness.

Try landing on your heels while running barefoot, it hurts, which is why most barefoot runners land on the front part of their foot.

This means that humans today have retained the same forefoot strike pattern our ancestors adopted millions of years ago, which is the answer to the million dollar question: forefoot running is the right way to run.