I experimented with compression socks for running, and I was disappointed because they were an irritant for me. When I switched over from heel strike to forefoot running, I struggled with shin splints, so I thought I’d try compression socks to help with the shin pain, but the socks only made the pain worse.

If you are in the early stages of learning forefoot running and are experiencing shin splints or other aches and pains in the leg, or if you struggle to maintain a fast pace, you might be wondering what are the benefits of compression stockings?

The answer is compression socks for runners don’t work, they are poorly associated with improvements in running economy and mechanical efficiency. 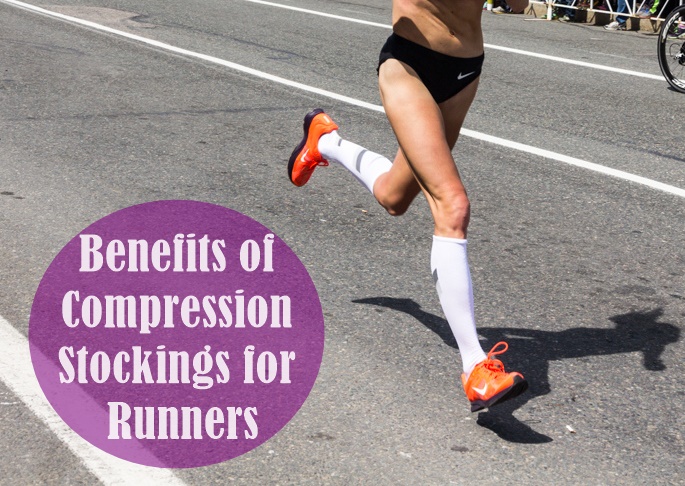 Benefits of Compression Stockings for Runners

Other experts have theorized that athletic compression socks add biomechanical support to the lower leg, resulting in greater mechanical efficiency. However, the conventional running shoe and knee braces were thought to do the same thing, until recently both are now considered as targets for causing injury and poor performance.

The problem with lower leg compression socks is that they are too tight, which is not the best for the Achilles tendon, which naturally has a poor blood supply going to it.

In forefoot running, the Achilles tendon is a major energy supplier along with other muscles and tendons that support the ankle and knee. Compressing these areas during running would disrupt blood flow. But as for recovery, compression sleeves for the legs might be okay.

If you want better gait consistency with good form, barefoot running is the way you want to go.

Barefoot running allows for consistently self-selected movements that are most economical and kinematically optimal. Barefoot conditions forces a runner to maintain similar gait patterns via adjusting leg stiffness and muscle activity in a natural response to changes in surface properties.

The use compression stockings may cause a barefoot-forefoot runner to deviate away from their preferred, or ‘natural’ mechanics, resulting in decrements in movement efficiency. Therefore, compression socks may be considered an interference by potentially preventing a runner from maintaining their own, most economical running pattern.

Hunter I, Smith GA. Preferred and optimal stride frequency, stiffness, and economy: changes with fatigue during a 1-h high-intensity run.