Doing lots of barefoot running training may boost brain function in ways that will supercharge your forefoot running performance. Run barefoot all the time, than you will be even more on top of your game. This is because barefoot running enhances sensory stimuli at the feet which forces you to be more alter reflexively and mechanically, so you become better at maintaining your running form under fatigue conditions.

A new study by Brick et al. investigated the mental processes and attentional strategies of elite runners under fatigued conditions. The researchers found that most elite runners focused solely on sensorimotor outputs to optimize running performance.

Surprisingly, the study found that periodic monitoring of internal states, such as breathing and exertional pain, was a distraction that resulted in negative thoughts, such as ‘running feeling hard’. Evidently so, focusing on patterning your breathing with step frequency, increases cognitive strain under fatigue conditions.

Attentional focus on breathing patterns can also lead to contradictory mental and physical states –just because you breathe heavily, doesn’t mean the body is tired.

According to the study, more effective mechanical tactics rely on sensory stimuli, which resulted in the least amount of cognitive strain. Essentially, when the going gets tough, try to relax and run by feel to make the task appear less hard.

Why is sensory stimuli the foundation of optimal running performance? Sensory stimuli is responsible for productive biomechanics, such as the timing of reflexive responses, dynamic stability, and forefoot striking, all of which are hacked by cushioned running shoes.

The researchers concluded that the crucial component to winning are informational aspects of sensory stimuli and that optimal running economy is most likely stimulus driven, suggesting that barefoot running can have a supportive effect on performance. 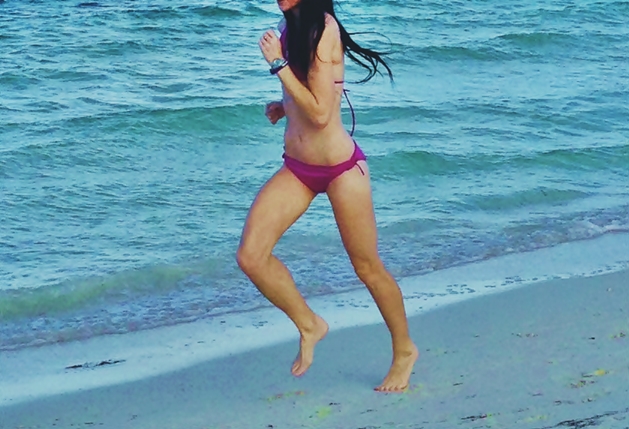 If heightened sensory stimuli boosts performance, running barefoot may afford a runner the advantage of efficiency over a shod runner. By comparison, a shod runner is overcome with an urge to engage in unproductive mechanics, such as heel striking and inappropriate knee and hip flexion, that deleteriously interfere with performance.

So instead of stressing out about whether to focus on breathing, weather, or time, to cope under pressure, all you need is a burst of sensory stimuli via barefoot running as a safe refuge in sustaining efficient forefoot running form.

Not a fan of barefoot running? Click here to read about ultra minimalist footwear that mimic the barefoot experience.

Why Forefoot Running Will End Up Changing Your Life