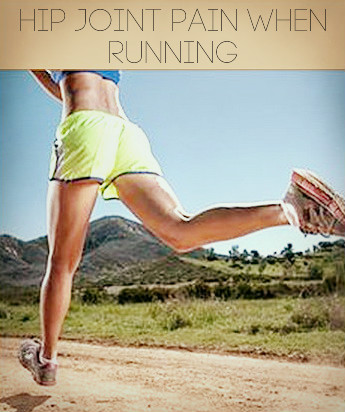 In the current study, the discovery that the hip muscles were the main source of forward propulsion in heel strike running, bolsters the idea that using the hips to accelerate the mass of the body may cause hip joint pain when running.

Most researchers now believe using the hips for propulsion drives the swing leg more forward, causing the foot to land in front of the body. The net result is rapid, but temporary braking at touchdown, exerting high compression on the knee-joint which is why, according to Winter et al., the notion that hip extension produces propulsion is not universally accepted, and here’s why:

Needless to say, the hip joint appears to have a big job in heel strike running. Being used for forward propulsion is an easy trap for hyperextension of the hip joint resulting in painful flare-ups. Furthermore, almost all existing treatments are aimed at improving hip strength.

But, is hip weakness the main symptom that characterizes hip joint pain when running?

A better understanding of biomechanics has led to more refined treatments. For instance, by switching to forefoot running, associated with fewer side effects than heel strike running, makes it possible for runners to run without hip joint pain.

That biomechanical adjustment is important because we now know that the ground reaction force in forefoot running is not propulsive.

Romanov and Fletcher reasoned that the forward momentum is gained because the body is always falling forward in forefoot running. Simply lean forward very subtly, let your foot catch you from falling by letting it land close to your hips, making sure both knees are slightly bent at all times, will blunt the urge to push with your hips.

Althetic Tape – Latest findings on the benefits of using KT Tape for running.

Preventing Injury – Running with less injury means landing with a forefoot strike, not a heel strike.

Shoes – 30 of the best, most popular minimalist shoes that will help you maintain exceptional forefoot running form.