One reason that heel strike running produces a greater ground reaction force is the presence of 2 impact peaks which are not produced in a forefoot strike.

The first impact peak, known as the impact transient, occurs after the initial contact of the heel with the ground and is in response to loading via deceleration.

The second peak, known as the thrust peak, occurs during mid-stance where the weight of the body transfers over the arch onto the forefoot.

By definition, impact force is defined as a shock that occurs when two bodies abruptly collided into each other.

Generally speaking, a collision involves braking or deceleration which cannot be good if braking occurs during running when the body is trying to move forward, right?

Why would the human body evolve a running technique that favors braking during running?

If this is the case, than natural selection has played a cruel trick on humans because the shock produced by the heel strike induced-collision is one of the primary etiological agents in degenerative joint disease and most injuries of the musculoskeletal system.

In addition, the impact peaks of heel strike running are directly related to tibial stress fracture and plantar fasciitis.

Forefoot running generates a very low collision force, even on very hard surfaces such as pavement, because the ball- to-heel movement pattern of the foot allows for a flatter and fluid interaction with the ground.

Plus, maintaining a more forward position of the center of mass coupled with lifting the foot off the ground to create a fall are pivotal for reducing braking. 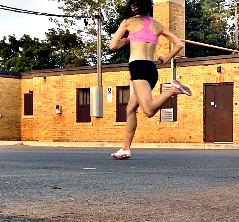 The mechanical parameters of forefoot running complement forward momentum rather than oppose it as in heel strike running.

The more we learn about the double impact peaks of heel strike running, the better able we can clarify why heel strike is what characterizes running as the most injurious activity. This is not the case when the forefoot makes initial contact with the ground!

Lohman et al. A comparison of the spatiotemporal parameters, kinematics, and biomechanics between shod, unshod, and minimally supported running as compared to walking. Phys Ther Sport, 2011; 12: 151–163