Running on a treadmill may be a barrier to performance and injury prevention for forefoot running learners.

One of my biggest mistakes when I began my forefoot running journey was that I was strictly a treadmill runner and I experienced more downs than ups in that I persistently suffered shin pain. My shin pain eventually disappeared the more I ran outside. I also felt like I was braking more when I ran on a treadmill. So just be really careful on the surface you choose to run on, and my conclusion is that for forefoot runner beginners, running overground is safer than treadmill running. 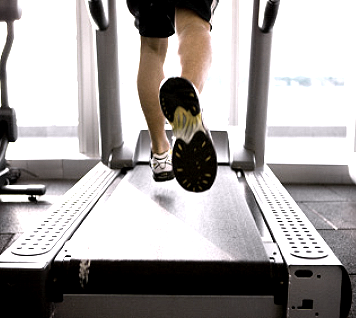 Running on a Treadmill – Should New Forefoot Runners Do It?

If you are a newbie forefoot runner who runs on a treadmill regularly and has experienced injuries, you might want to consider running overground from now on.

In addition, running outside makes us more likely to work harder because of wind resistance and surface irregularities which challenges our stability. Numerous studies have found that more energy is required to overcome air resistance when running overground as compared with treadmill running.

Although, setting the treadmill at 1% incline is enough to compensate for the metabolic cost of overcoming air resistance, running on a treadmill diminishes the likelihood of maintaining ankle strength compared with running overground.

Definitely Refrain From Sprinting on a Treadmill

Forefoot running is for faster running speeds, however running fast on a treadmill was found to be unsafe.

Riley et al., investigated the effects of treadmill and overground running on sprinting mechanics and found that treadmill runners consistently landed flat-footed and not forefooted.

In sprinting, a forefoot strike is the proper foot strike and allows a higher turnover, minimizes braking and contact time, and most importantly reduces the ground reaction force.

Because the treadmill is a deterrent of a forefoot strike at faster speeds, sprinting on a treadmill poses substantial dangers that can be easily avoided by running overground.

Instead of putting yourself in harm’s way, avoid forefoot running on a treadmill and stick to the roads and trails. Because overground running is more deeply rooted in our evolution, running outside allows a runner to carry the prime directive of forefoot running: proper lower extremity joint flexion.

For more tips on learning forefoot running, check out my other articles on how to run forefoot right do it right!