Most of us have weak feet. This may be a problem to a forefoot running beginner because the soft tissues and bony structures of the forefoot may be at a slight risk of overuse injury. Wearing cushioned, stiff running shoes is going to be minimal help for your forefoot strength because your foot muscles are not going to be engaged as much as they would be if you were to wear a minimalist running shoe.

So, to strengthen the forefoot,  you need to dive into barefoot running. But, if you hate the thought of going barefoot and feel that it’s not a sustainable plan, what I want you to do is find a running shoe that feels barefoot, shown below. 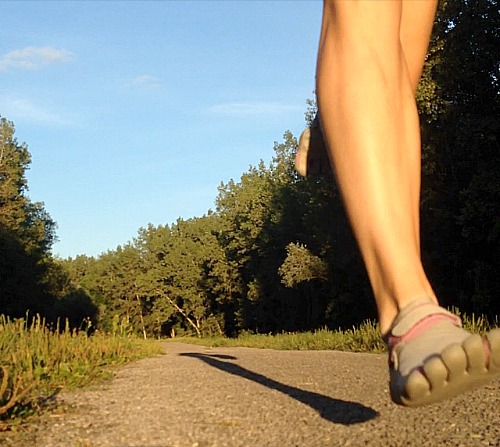 How to Strengthen the Forefoot for Forefoot Running?

So, how to strengthen the forefoot for forefoot running?
that closely approximates being barefoot.

The researchers found that the initial strengthening occurred at the neuromuscular level where active motor units for intramuscular coordination increased which enhanced firing frequencies.

Such improvements may also enhance how the neuromuscular system interacts economically and efficiently during forefoot running.

Likewise, the athletic superiority of Ethiopian distance runners, most of which ran barefoot, is thought to be the result of specific neuromuscular interactions of the foot-ankle complex as well as the lower leg musculature.

Such an assessment includes the relationship of increased mechanical stimuli at the foot via barefoot conditions contributes to the high mechanical efficiency of Ethiopian distance runners.

Wearing minimalist running shoes as much as possible will not only further refine your forefoot running technique, but enables the foot to be more injury resistant.

How to Run Forefoot

How to Fuel Naturally for Running

What is a Forefoot Running Shoe