Roughly speaking, strength training for forefoot running is not a requirement since forefoot running operates more as a spring-system that involves more use of the tendons rather than the leg musculature. 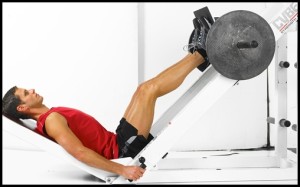 According to a recent study by Doma and Deakin, excessive strength training before running hampered running performance:

Strength training was also found to interfere with the quality of a subsequent endurance training session.

Big, strong, leg muscles are not necessary for forefoot running.

Notice how slender Kenyan and Ethiopian elite distance runners are?  Weight training is not a major priority in their training regimen.  They just RUN.

East African elite distance runners outperform even though non-African distance runners look physically stronger -most are ripped.  Perhaps a more slender body frame equates to greater running efficiency? It sure does since muscle mass is heavy.

Above, notice the elite East African runners have less muscle mass than elite non-African runners. Yes, it’s relevant to point out that East Africans are genetically built to be more slender in appearance, but if muscle strength was essential in running, why aren’t East African elite runners buffing up like the American runners?

Why do runners in North America focus a lot on strength training?  To avoid injury and improve mechanics, right?

Assume a runner never encountered injuries and had great biomechanics, in theory strength training would not be necessary.

But consider this, many East African runners are habitual forefoot runners as a function of running barefoot throughout childhood and adolescence.

Forefoot running has been shown to reduce peak ground reaction forces and shock attenuation compared to heel strike running, thereby lowering the likelihood of injury. Many recreational runners heel strike and roughly 75% are injured each year.

East African runners appear to suffer less injuries and typically compete in more races per year.  Why? #1 forefoot running may be safer on the body, and 2# running barefoot strengthens the feet and legs.

East African runners may have sufficient lower extremity strength from running barefoot and by running on their forefoot, not their heel. The predicted outcome from running forefoot: less injury, less time pumping iron.

If you run correctly, you wont get injured. Running with a less forceful foot strike will protect your body from health harming impact shocks and may dramatically reduce the frequency and severity of injuries related to heel striking.