Barefoot running sandals, such as the Huaraches worn by the Tarahumara Indians, improve running technique by reducing over-striding.

The influence of running shoe design on foot strike mechanics must be understood in the context of runners knee prevention.

Runners who run in Tarahumara running sandals have similar biomechanical traits to barefoot runners in that they have a higher step frequency and show less overstriding during forefoot running.

Overstriding when running is strongly linked to runners knee. Overstriding means the ankle lands in front of the knee at touchdown during running (shown below). 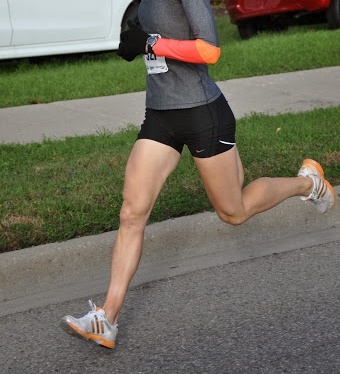 Overstriding is also facilitated by the traditional running shoe –shoes with an elevated cushioned heel. These shoes result in a more extended knee at foot strike during running. In this case, the knee is unbent at foot strike, causing the ankle to land ahead of the knee and center of mass, resulting in damaging impacts.

In Tarahumara running sandals, the orientation of the foot (plantarflexed ankle) enables the ankle to align vertically relative to the knee, thereby greatly lowering knee-joint compression during running.

A plantarflexed ankle at touchdown is indicative of a forefoot strike, which is associated with less knee-joint compression as compared with heel strike running in which overstriding is very high and so is the incidence of runners knee.

Pure minimalist shoes such as the Tarahumara shoes

are the better option for saving your knees. The benefits of these shoes on knee-joint health have received high-level support from the scientific literature whereas support regarding the traditional running shoe is weakest.

Be sure to check out other barefoot inspired shoes that great for improving running form.

Look Straight Ahead While Running Or Down?