I love minimalist running sandals because most were inspired the Tarahumara shoes, also known as the huaraches

. These running sandals are more than ideal for forefoot running because they encourage a forefoot strike landing as this is the prominent foot strike pattern of the Tarahumara endurance runners, too.

The heel elevation of the traditional running shoe actually prevents a forefoot strike landing and encourages heel strike during running thereby increasing the external load applied to the musculoskeletal system. 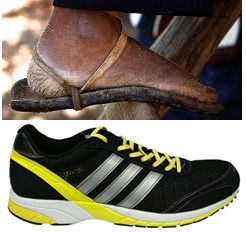 Likewise, reduced ankle dorsiflexion reflects a forefoot strike landing as well as a smaller stride length which lowers the braking effect during running.

Lieberman also found that Tarahuamara shoes reduced over-striding meaning that at touchdown, the ankle was positioned below the knee and resulted in a more vertical lower leg. This also means that the Tarahuamara shoes prevented knee extension at touchdown which reduces knee-joint torque and therefore, is an imperative intervention strategy for runners knee.

Tarahuamara shoes are pure minimalist shoes that have a thin, flexible outsole and no corrective elements or arch support, allowing the foot-ankle complex to self-strengthen.

The ultra thin outsole provides enough protection from the rocky terrain without compromising proprioception and thus the forefoot running technique.

Nonetheless, the findings provides more comprehensive evolutionary thinking that reaffirms that a forefoot strike landing was the dominant foot strike utilized by our barefoot running ancestors over 4 million years ago and that barefoot inspired footwear is important to health for runners.

Here are other Tarahumara-inspired barefoot running sandals I think you’ll be interested in.

Best Places to Get the Vibram FiveFingers