Many assume that running without shoes on pavement will cause major injuries. Indeed, pavement has a greater surface hardness than grass –that’s a no brainer. Plus, human’s evolved to run on natural surfaces, which does not include roads. 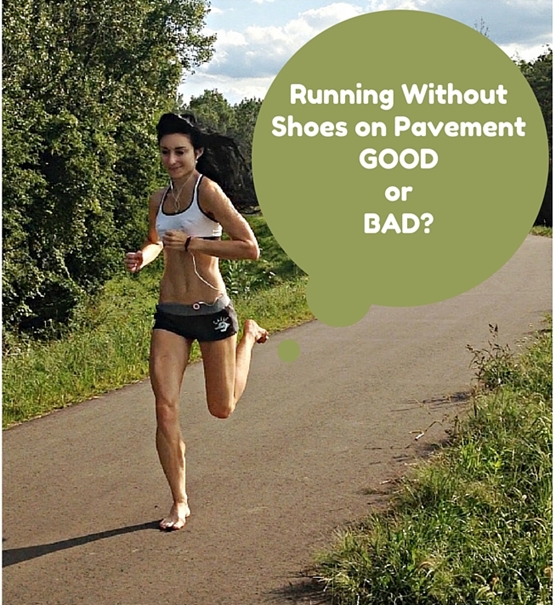 Why Running Without Shoes on Pavements is Safe

What has gone under-appreciated is the understanding of the kinematics and mechanics of a barefoot/forefoot running style which actually permits safer running, regardless of surface hardness.

Habitually barefoot runners who land on their forefoot do not generate an impact transient force [1], allowing them to run safe on hard, unnatural surfaces. Landing this way is much safer than landing with a heel strike because a heel strike landing generates a distinct impact transient in the vertical ground reaction force, which projects more loading on the body [2].

In addition to the impact transient, a braking force is also generated at heel strike and becomes greater as the speed of running increases. This is why running with a heel strike is more dangerous than running with a forefoot strike.

Because the impact transient is eliminated, regardless of surface hardness, in a forefoot strike landing, forefoot runners are able to resist injury when running without shoes. Further, Dr. Daniel Lieberman

and his colleagues found that other forms of impact did not differ with various surface hardnesses, such as a pavement, or a steel plate in habitually barefoot runners who naturally landed on their forefoot.

In other words, running barefoot with a forefoot strike on hard, unnatural surfaces did not increase impact –as once previously assumed.

Click here to learn more about how barefoot running decreases the risk of injury. Or if you don’t want to run barefoot, have a look at these barefoot like running shoes as they will also improve your forefoot running form.

Here are more articles on the dangers of heel strike running: