Orthotics, commonly prescribed to minimize abnormal movements, such as frontal plane movements, of the foot during running, are supposed to reduce the likelihood of lower leg injury.

Excessive frontal plane movements of the foot during midstance in running is linked to tibial stress fractures.

It then follows that dialing down the amount of shoe cushioning reduces frontal plane movements of the foot, demonstrating that this approach is far better than orthotic intervention. Why? Because the problem isn’t you, it’s the shoe.

Do Orthotics Even Work? 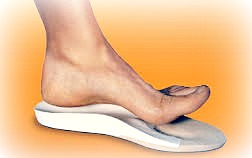 The only cure for the seemingly uncontrollable movements of the foot is by running barefoot or in pure minimalist shoes. Supporting this, a study by Ekenmen et al. found that orthotics had only minor success at reducing tibial strain.

A more current study by Boldt et al. found that the application of medially wedged orthotics to cushioned running shoes had minimal effect on knee and hip joint kinematics in the prevention of knee pain.

Other researchers admit that gait retraining is probably more effective than orthotics at reducing loads on the lower leg during running. Another obstacle is that podiatrists need to decipher how custom orthotics and cushioned materials of a shoe fit together.

What is irrefutable, however, is that shoe cushioning plays an active role in causing many injuries related to abnormal foot movements in runners. Often, in cushioned running shoes, frontal plane movements of the foot is preceded by a rapid spike in impact at touchdown due to a powerful desire of the foot to plant itself firmly on the ground.

Suppression of unwanted foot movements during running begins with wearing less on your feet, better yet, go barefoot as it forces you to learn movement/impulse-control skills that few habitual shod runners acquire. This claim is not anecdotal, but supported by decade’s worth of research.