Here are the 2 common myths of the running-related iliotibial band syndrome causes. It was assumed the cause of ITBS was due to an inflamed bursa (bursitis) ‘supposedly’ located between the IT band and a femoral band-like structure. This assumption is now incorrect.

A bursa is a small fluid-filled sac that acts as a cushion between bones and tendons and helps reduce friction. 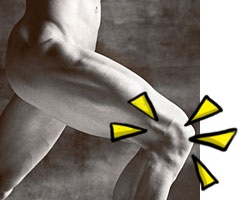 2 Myths on the Iliotibial Band Syndrome Causes in Runners

In the case of ITBS, it was assumed that the bursitis arose from friction of the IT band across the femoral band.

However, a recent study by Falvey et al., investigated ITBS in cadavers, surprisingly found that no such bursa existed between the two bands.  Meanwhile, rehabilitation practices for ITBS was based on treating this imaginary inflamed bursa.

The second incorrect assumption: ITBS is caused the IT band rubbing and generating friction with a nearby band-like structure, the lateral condyle of the femur, recently turned out to be untrue as well.

What is the Actual Cause of ITBS?

ITBS is caused by a compressed fat pad located beneath the IT Band.  The fat pad gets compressed if a runner presents a crossover running style, or runs with a narrow step width.

These minor biomechanical impairments can be corrected by strengthening the hip flexors  and the gluteus medius to allow the feet to land further apart from each other (aka a wider step width).

Check Out More at Run Forefoot:

One sure way to gain running endurance without injury.

Spike your water with these water-soluble energy tablets.

Your cushioned heeled running shoes are making you heel strike.

How long does it take for you to feel comfortable running in zero-drop minimalist shoes?