Switching from a heel strike to midfoot strike (instead of a forefoot strike) is not enough to protect against running injury or improve performance. 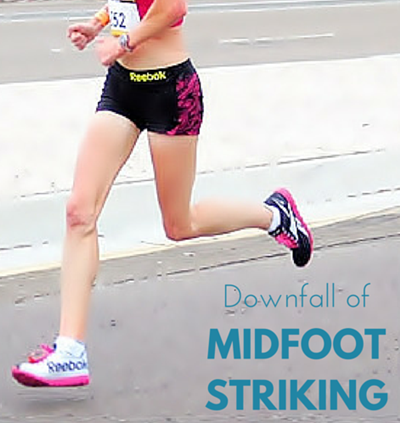 According to a recent study by Craighead et al. the Midstance to Midstance Running (MMR) technique shares similar biomechanical traits to Chi and Pose Running in that the MMR technique discourages a heel strike landing, but encourages a midfoot, not a forefoot strike landing.

So how effective is the MMR technique (aka midfoot strike running) at improving performance and injury prevention?

Midfoot Strike Does Not Improve Performance

Midfoot Strike Does not Prevent Injury

Forefoot running reduces impact loading in two ways: 1. knee flexion at initial contact is lower and 2. the upper body is more aligned at initial contact. Therefore, the horizontal distance between initial contact position and the center of mass (upper body) is very small and is how braking along with the other harsh forces related to both heel strike and midfoot strike running are minimized. The researchers concluded that with the MMR technique, a midfoot strike landing has implications to injuries because it increases knee flexion velocity.

How to Prevent Arch Pain