I have been forefoot running in the Vibram Five Fingers for 5 months now and I will never run in cushioned running shoes ever again.

In the Vibram Five Fingers, I run 18-20 km a day without taking a day off. Call me crazy, but my legs and feet feel great during and after running. They are never sore, I always feel energized, so why take a day off?

I don’t stretch. I don’t take ice baths and I am never stiff in the morning, even after hill repeats or intense speed work. However, I did not always feel this great with respect to forefoot running.

Before switching to the Vibram Five Fingers, I was forefoot running in minimalist shoes with cushioning where I frequently experienced the odd niggle and suffered small bouts of shin splints from time to time. I knew my forefoot running technique was solid; my problems were sourced in the shoes I wore. 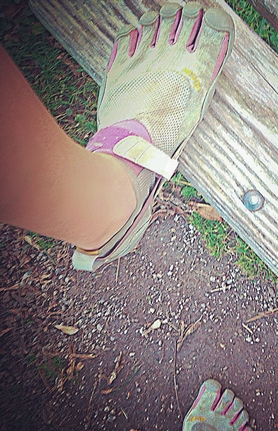 What made me decide to go pure minimal with the Vibram Five Fingers?

After reading the telling study, Athletic footwear: unsafe due to perceptual illusions, it became clear to me that the body reacts unfavorably to even the slightest amount of shoe cushioning, and this response of the body is significantly underappreciated in the scholarly literature on running injuries.

When it comes to forefoot running, the body really dislikes cushioning under the foot which is reflected in pain and injury. Unfortunately, many recreational runners stubbornly refuse to accept this connection.

Runners are conditioned to believe that running barefoot or in the Vibram Five Fingers intensifies pain, but what they don’t know is that the probability of a forceful foot strike is greater in a cushioned shoe. More and more studies further delineated that excessive shoe cushioning, particularly under the heel, is directly related to a greater ground reaction force, impact loads on the body, and heel pressure.

When forefoot running in a cushioned minimalist shoe, there is a brief encounter with mechanical instability between the body and the ground due to impaired proprioceptive feedback. As a result, it becomes challenging to maintain proper positioning of the center of mass without deviation, which increases the likelihood of injury.

Cushioned minimalist running shoe hinders proprioception, thus the foot is unable to adequately activate a series of muscle contractions in the lower extremity that allow for shock absorption.  This exposes the legs to greater shock transmission, leading to soreness and injury during forefoot running.

Runners need to understand and accept that shoe cushioning is not needed to run safely and that proprioception via barefoot running or in the Vibram Five Fingers are pivotal at correcting unstable foot placement and force production during forefoot running.

We Are Our Own Protection

The human body virtually has it’s own set of impact reducing mechanisms built-in to the musculature which ensures safe running while barefoot on any surface, yes even on pavement.

In biology, a reliable guide to understanding function is to study the structure. The structural parameters of the leg and foot musculature minimizes impact thereby protecting the musculoskeletal system from painful impacts and injury when barefoot running with a forefoot strike.

This is why running barefoot or in barefoot-inspired footwear such as the Vibram Five Fingers feels comfortable. Unfortunately, many shod-runners are afraid to go there in fear of injury. However, cushioned running shoes results in an untrained foot, increasing susceptibility to pain, discomfort, and injury.

Habitually running in the Vibram Five Fingers results in better forefoot running mechanics and a well-trained foot that is better able to disperse pressure. 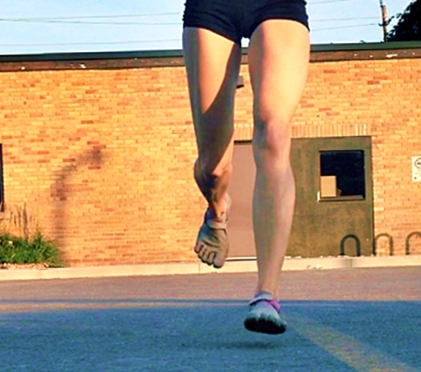 Initially, I was afraid of running in the Vibram Five Fingers and I know many runners are, but if you have a firm understanding of the forefoot running technique and if you avoid ‘jogging’ and run faster (7:30 min/mile or less), you will encounter how comfortable running is without protection on the feet.

More on the Dangers of Cushioned Running Shoes: